THE BOYS ARE BACK IN TOWN!

Just in time for kickoff of the 2015 college football season, ESPN and Nissan are bringing back The Nissan Heisman House, giving fans a glimpse of what it might be like if the winners of football's highest individual honor – the Heisman Trophy – lived together under one roof.
Read More
CATEGORIES »
Community Events ,
TAGS »
College Football , ESPN , nissan , nissan heisman house , 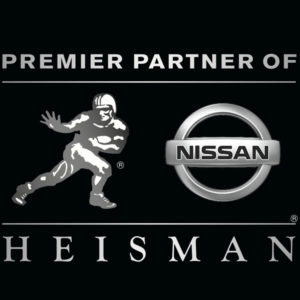 NASHVILLE, Tenn. – Just in time for the start of the college football season, Nissan and ESPN are bringing The Nissan Heisman House back, giving fans a glimpse of what it might be like if the winners of the Heisman Trophy lived and played together under one roof. While lighthearted in approach, the unique marketing campaign is part of Nissan's ongoing support of the Heisman Trust's year-round community support and charitable efforts. College football fans are also given the opportunity to vote for their favorite 2014 Heisman Trophy candidates, with Nissan's official vote given to the crowd-sourced winner.

Currently in its fourth year, this year's Nissan Heisman House campaign stars 11 Heisman Trophy winners in humorous vignettes and stunts, an interactive website and a Heisman House Tour that will travel to college campuses throughout the season. A behind-the-scenes show featuring footage and interviews with the featured Heisman members will continue to air through August 28 on ESPNU. The website, along with a series of spots, will debut on August 28 across ESPN's platforms.

The concept of the house revolves around the online platform, www.NissanHeismanHouse.com, where fans can tour the house, learn about current members, vote for the next Heisman Trophy winner and watch behind-the-scenes footage filmed during the campaign production. Eight of Nissan's highest-rated vehicles, including the Nissan GT-R, Altima, Titan, Pathfinder, Murano, Rogue and JUKE are featured prominently in the campaign.

"Nissan's Heisman House brings to life a fantasy for most college football fans – just hanging out with some of the best college football players that ever played the game," said Fred Diaz, senior vice president, Nissan Sales & Marketing and Operations, Nissan North America, Inc. "Not only is it great to join ESPN in bringing a little more fun and excitement to games this fall, Nissan is particularly proud to play a role in some of the rewarding work of the Heisman Trust."

The Heisman House campaign supports Nissan's long-running sponsorship of the Heisman Memorial Trophy Award. In recent years, the partnership has expanded beyond the "Heisman House" and the Nissan Heisman vote to help raise the visibility of The Heisman Trust's mission of supporting the underprivileged and underserved.

This dovetails with Nissan's mission to improve the communities where its employees and customers live. A number of Heisman winners have joined Nissan in support of its ongoing Habitat for Humanity efforts, including an annual weekend of service.

This past year, six Heisman winners joined Nissan in Texas to build a Habitat home and conduct a youth football clinic for underprivileged kids – joint activities supporting both organizations' missions and further demonstrating the power of the partnership. Through these expanded activities, the Heisman legends work closely with Nissan employees toward a common philanthropic goal. 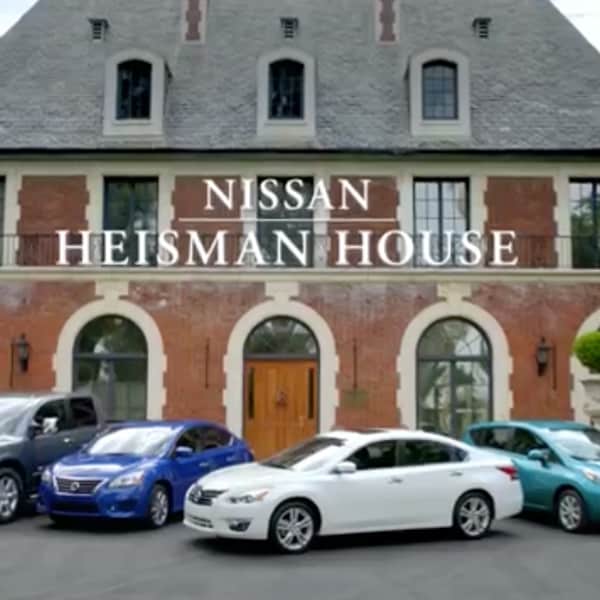 NISSAN NEWS RE-PRINT:
For the third straight year, Nissan and ESPN are giving viewers the chance to imagine what it might be like if the winners of college football's highest individual honor - the Heisman Trophy - lived together in the same house. The Nissan Heisman House returns in time for the start of the college football season and stars 13 Heisman trophy winners, an interactive website and a real-life Heisman House Tour that will travel to college campuses throughout the season. The website and vignettes debut on August 31 prior to ESPN's Saturday Night Football game on ABC, followed by other ESPN platforms throughout the season.
The Heisman House supports Nissan's long-running sponsorship of the Heisman Memorial Trophy Award. Developed in collaboration with TBWA\Chiat\Day, OMD and ESPN's in-house creative team, CreativeWorks, the concept revolves around the online platform, www.NissanHeismanHouse.com, where fans can vote for the next Heisman Trophy winner.
Visitors can once again tour the house, learn about current members and watch behind-the-scenes footage and interviews filmed during the campaign production. Eight of Nissan's highest rated vehicles, including the 2014 Altima, Sentra and the all-new Versa Note, are integrated into the site and the campaign.
"This year we've added some entertaining new elements as we begin another exciting season in support of the good works of the Heisman Trophy Trust," said Jon Brancheau, vice president, Marketing, Nissan North America, Inc. "With the online voting for this season's top Heisman candidates, combined with the fun of seeing past Heisman winners interact with each other, we're going to capture the attention of sports fans across the country."
In addition to the website, the campaign will present six vignettes directed by award-winning director Erich Joiner. This season's Heisman House features returning members Robert Griffin III, Barry Sanders, Ty Detmer, Ron Dayne, Matt Leinart, Troy Smith, Tim Brown, Carson Palmer and Desmond Howard. This year's spots introduce newcomers Sam Bradford, Earl Campbell, Tony Dorsett and Mike Rozier to the roster of housemates. Each unique ad, filmed in Pasadena, Calif., depicts what life might be like if several Heisman trophy-winning players shared a house. From lingering rivalries to generational misunderstandings, each spot explores a different, comical aspect of the fictitious scenario.
"The sustainability of the original concept with fresh scripts, new athletes and ability to the showcase new vehicles year over year is a tremendous creative story, which is a testament to the power of the idea," said Sean Hanrahan, senior vice president, Marketing Solutions, ESPN.
For the first time in the history of the initiative, Nissan and ESPN are introducing the Nissan Heisman House Tour, a simulated Heisman House that will travel to different college campuses throughout the country, leading up to the 2013 Rose Bowl Game presented by VIZIO. Fans will have the opportunity to relax in the Heisman House living room, take photos with the trophy and meet some of the Heisman trophy winners and ESPN talent.
CREDIT: http://nissannews.com/en-US/nissan/usa/releases/nissan-heisman-house-returns-for-a-third-college-football-season-on-espn
Read More
CATEGORIES »
News ,
TAGS »
heisman trophy , nissan heisman house , nissan san diego , San Diego Nissan ,