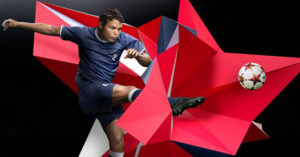 YOKOHAMA, Japan – As the UEFA Champions League group stage draw takes place in Monaco today, Nissan announces the first phase of its exclusive partnership activity with "UEFA Champions League Goal of the Week engineered by Nissan." This competition gives fans from around the world the chance to vote on the best and most exciting goals of Europe's most prestigious club football tournament.

Roel de-Vries, Corporate Vice President, Global Head of Marketing, Communications & Brand Strategy of Nissan said: "The UEFA Champions League sees the finest football players from around the world compete throughout the season. The Goal of the Week activity will enable football fans to debate and determine the best and most technical UEFA Champions League goals around every match week, offering an exclusive opportunity to bring the excitement from the football pitch directly to fans online."

UEFA Champions League Goal of the Week engineered by Nissan will show up to five of the best goals from each match week, as selected by UEFA's panel of judges. Fans will be able to vote from midnight (CET) every Thursday following those matches. Registered participants will be entered into weekly draws offering the opportunity to win a range of prizes, from official UEFA Champions League merchandise to match tickets.

Nissan is the official global automotive sponsor of the UEFA Super Cup and UEFA Champions League, with a deal that will cover the period 2014/2015 to 2017/2018. This activity further enhances Nissan's partnership with Europe's most prestigious club football competition, following the recent announcement that three-time UEFA Champions League winner, Andrés Iniesta and Paris Saint-Germain and Brazil captain, Thiago Silva have signed as Nissan ambassadors. As two of Nissan's new Engineers of Excitement, the players will help the company in its aim to introduce new innovations to the football fan experience and will play a key role in Nissan's new global advertising campaign.