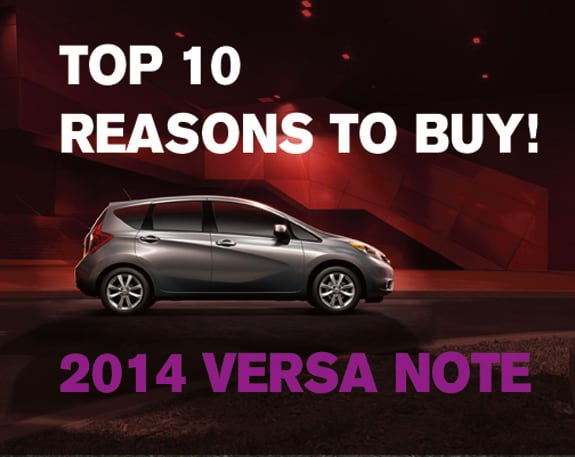 As the all-new 2014 Versa Note, the global follow-up to Nissan's highly popular Versa hatchback, gets set to do battle in the increasingly competitive U.S. entry-level subcompact segment, it has the numbers on its side. Here are just a few examples: 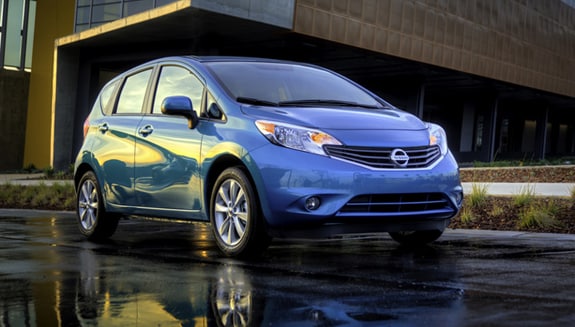 3. Leave the lineman on the curb. More weight is a good thing if you are a player in the National Football League, but not so great when designing a vehicle for fuel economy and driving responsiveness. The 2014 Versa Note features an estimated 300-pound weight reduction versus the previous generation design. It's the equivalent of kicking an NFL lineman out of the front passenger seat. Just hope he finds another ride.

4. Squash the competition (and drag). Lose the lineman, gain a squash player. In keeping with the sports theme, the unique side view of the new Versa Note body is marked by a highly distinctive character line.
Inspired by the trajectory of a squash ball hitting a wall, bouncing on the floor and returning to the player, this "rebound path" line projects the dynamic energy of Versa Note, whether on the road or standing still. The squash line is just one of many carefully crafted aerodynamic elements - including a large front spoiler, kick-up roof and underbody shaping - that gives Versa Note a coefficient of drag of 0.298 (CVT-equipped models). Game on.

5. Shutter Your Mouth. Among the many Versa Note class-exclusive*** features is the available Active Grille Shutter, the first ever used on a Nissan vehicle and the only one offered in the segment. By reducing the amount of air entering the engine compartment (generally at speeds above 20 miles per hour), it helps reduce aerodynamic drag - contributing to the overall nine percent lower coefficient of drag versus the previous Versa hatchback design.

6. Vented, Not Venti. Look closely at the new Versa Note's 370Z-style "boomerang" taillights and you'll see something quite unusual - a series of four thin openings on the flared outer lip. A world's first production design, the vented taillights help reduce wind turbulence around the back of the vehicle. The resulting smaller vortex helps keep the rear of the Versa Note clean, improving rear lamp visibility in bad weather.

7.Heads Up, Legs Out. Of all the best-in-class*** ways to judge the new Versa Note by, here are a couple you can get your head (and legs) around - the most front row headroom at 40.8 inches and the longest rear seat legroom at 38.3 inches, which is nearly four inches (3.7 inches) longer than the nearest competitor (34.6 inches). And just so that ample front room doesn't go to the driver and passenger's head, Versa Note offers available heated front seats to take care of the other extreme.

8.Turn Up the Volume. One of car designers' greatest challenges has always been making a small car big. The all-new Versa Note takes the previous generation design and stretches the envelope inside - while maintaining Versa's compact footprint. On the same wheelbase as the previous generation, the 2014 Versa Note features ample cargo volume of 18.8 cubic feet (rear seat up), best-in-class*** passenger room of 94.1 cubic feet and total interior volume of 112.9 cubic feet.

One other thing, to make it easier to enter and exit the spacious interior, there's a 20 percent increase in the degree of door openings (from the prior generation).

9. The Great Divide ('N Hide). If the incredible lifestyle flexibility provided by the new Versa Note's large, accessible hatchback - "Your Door to More" - wasn't enough, there's one more special feature designed to assist owners' active lifestyles. The innovative Divide-N-Hide® Adjustable Floor balances the sometimes conflicting needs of a flat cargo floor and maximized cargo space. The system's large split-folding floor board can be used to create a flat cargo area floor (with the standard 60/40 rear seat folded down), or to provide a hidden cargo storage area. With the floorboard tucked away (you never have to remove it from the vehicle unless you want to) it opens up a deep cargo well for carrying taller or bulkier items.

10. Bird is the word. Yet another affordable, class-exclusive*** technology found only on the new Versa Note in the segment is Nissan's advanced Around View® Monitor. The system utilizes four small superwide-angle cameras mounted on the front, side and rear of the vehicle to provide a "bird's eye" virtual 360° view of objects around the vehicle. Offered as part of the SL Tech Package, it provides additional selectable split-screen close-ups of the front, rear and curb views, helping the driver maneuver the car in or out of tight spots.

11. Connect the spots. When looking for the hottest parking spots in town in which to try out the Around View® Monitor, Versa Note's advanced NissanConnect? with Navigation System makes it easy - thanks to its POIs powered by Google™ and Google™ Send-to-Car features. With more than five million points of interest at the ready, it's easy to find or send directions to clubs, restaurants or other locations.

12.Easy Come, Easy Fill. While every 2014 Versa Note comes with a standard Tire Pressure Monitoring System (TPMS), the SL Package adds Nissan's reassuring Easy Fill Tire Alert system - which takes the guesswork out of filling a low tire with a beep of the horn and flash of the lights when you've reached the correct pressure.

13. $13,990. The last number might be the most impressive - the 2014 Versa Note's starting Manufacturer's Suggested Retail Price (M.S.R.P.) of just $13,990 USD****. Following the standard set by the high-value Versa sedan, the new Versa Note offers more value on all grades than the previous Versa hatchback (model year 2012).