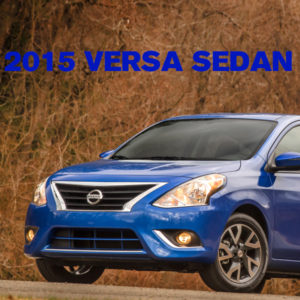 NASHVILLE, Tenn. - Nissan revealed photography and details of the new 2015 Nissan Versa Sedan, the best-selling vehicle for four years in a row*** in the highly competitive sub-compact segment.  The enhancements for the 2015 model year include new front and rear fascias, a range of interior refinements, and new grade level and packaging content.

Most prominent of the changes is the bold new front end treatment anchored by larger headlights, a more substantial looking fascia and standard chrome plating on the grille – all of which strengthen the family ties of the Versa Sedan with the Nissan stable mates – Sentra, Altima and Maxima.

Versa Sedan again offers five-passenger practicality with a high degree of comfort and refinement. Interior enhancements for the 2015 model year include a new center stack shape, which is similar to that found on the sporty Versa Note, a revised meter display with white LED display (previously orange illumination color) and a new, more substantial, steering wheel with standard audio and Bluetooth® Hands-free Phone System controls.