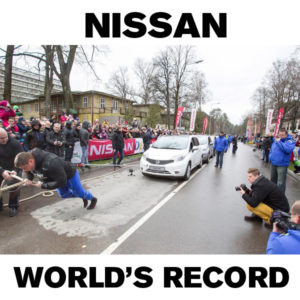 The world's strongest man, Zydrunas Savickas, set a new Guinness world record for the "Most Cars Pulled By One Man" when he towed 12 new Nissan Notes weighing in at a total 28,530 pounds (12,941 kg).
Savickas, five-times World Strongest Man champion and widely regarded as the one of the greatest strongmen of all time, only had one attempt to set the new record. Wearing a specialized pulling harness and rope arrangement, he pulled the 12 Nissan Notes over five meters, accomplishing the feat in a staggering 32.9 seconds.
Held in Druskininkai, Lithuania, this world record attempt marked the end of the Lithuanian Car of the Year test camp with crowds turning out from all over the country to see their national hero Savickis set the new record.
Savickas was presented with an official certificate from Guinness World Records representative Jack Brockbank, marking this major achievement from the strongman.
The large crowd not only got to witness the record setting moment but also got the opportunity to admire the all-new European market Nissan Note. Launched earlier this year and built at Nissan's Sunderland plant in the UK, the new Note sets new standards for sector-first technology, practicality, design and value for money. Engineered to meet the unique demands of the European market, the new Note's Pure Drive 1.2-liter gasoline engine with manual transmission gives drivers improved CO2 emissions, increased torque and great fuel efficiency, but not even this supercharged engine would be a match for the world's strongest man in this challenge!
"We at Nissan like setting records and are always aiming high. Today we are delighted to have been able to help Zydrunas set another world record and to see so many people turn out to support him. It was a great way to mark the end of the Lithuanian COTY camp," said Taina Erkkilä, Communication Director of Nissan Nordic Europe.
On the completion of the record attempt, Savickas commented: "It is always great to set a new record. Once I got into my stride pulling the 12 Nissan Notes was fine. Obviously, a big thank you to Nissan for helping me set the record and making it all possible."
The world record-breaking attempt is the second time this year that Nissan has entered the record books. In August, Nissan helped the Electric Vehicle Union and the Norwegian EV Association set a new Guinness World Record when 260½ electric vehicles were driven in unison, the majority of which were Nissan LEAFs, including the Nissan Half LEAF.
CREDIT: http://nissannews.com/en-US/nissan/usa/releases/nissan-helps-world-s-strongest-man-set-new-guinness-world-record
Read More
CATEGORIES »
Just for Fun , Mossy Stories , News ,
TAGS »
most cars pulled by a man , Nissan Note , nissan san diego , nissan world record , San Diego Nissan ,

most cars pulled by a man Archives - Mossy Nissan