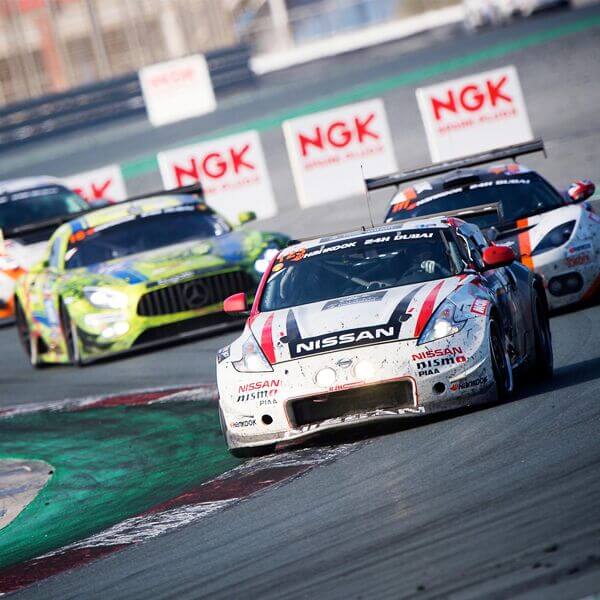 DUBAI, UAE – Nissan's all-GT Academy alumni line-up for the Dubai 24 Hour endured a bittersweet day in the United Arab Emirates after finishing eighth in class in the opening endurance race of the year.
The Nissan 370Z GT4 – steered by Jann Mardenborough, Ricardo Sanchez, Romain Sarazin and new 2016 GT Academy winner Johnny Guindi – was easily the quickest car in the SP3 / GT4 class.
After qualifying second, Mardenborough jumped to an early lead and recorded the fastest lap of the race  – nearly two seconds a lap quicker than the best effort of the eventual class winner.
However, the team suffered a number of misfortunes (on Friday the 13th). Issues with broken dampers twice sent the car to the pits plus an electric issue and a four-lap stop to repair crash damage after Johnny Guindi spun at the start of his first stint.
The delays eventually pushed the former gamers 20 laps adrift of the class winner. The Nissan 370Z GT4 completed 511 laps over the 24-hour period among the packed 92-car grid. The Nissan was one of only three cars in the class to record a time in the 2-minute, 10-second bracket.
Mardenborough's fastest lap of 2:10.180 was nearly half a second faster than the next nearest challenger, and all his three GT Academy teammates all turned laps in the 2 minute, 11 second range.
"The car mechanically is sound, but cosmetically it is a bit battered," said Mardenborough. "We kept it running, and the Nissan GT Academy Team RJN team did a really good job changing dampers, fixing the damaged door and repairing the contact. I'm pleased we got to the end, but it was not where we wanted to finish at all. My teammates did a really solid job. Johnny's first stint didn't go to plan, but he redeemed himself with his second and third stint, and to see him cross the line – flashing the lights and then for him to get out the car with tears in his eyes – showed it meant a lot to him. We just had too many ups and downs. The car had the pace and the was very quick – not just the fastest lap overall in the class – but when we were running we were consistently faster then everyone but we'd always hit issues. As a team we worked really well with the strategy. It would have been nice to have been on the podium. Nissan has finished second and third in the past with this car and now we have our sights on next year."
New GT Academy Driver Guindi Bounces Back at Dubai 24 Hour
2016 GT Academy International winner Johnny Guindi went through an intense preparation period for his international race debut at the Dubai 24 Hour, but there is nothing like your "first day of school."
As part of the Nissan GT Academy Driver Development Program, Guindi tested and raced in lead-up events in both the UK and the UAE, but joining the 92-car grid for your first 24-hour race was still a big challenge for the 22-year-old Mexico gamer.
"I've never felt so many different emotions in just 24 hours," said Guindi. "I've never felt as terrible as I did after my first stint in the car. I went out on cold new tires just as the sun finished to set, and just nine corners later – after a lapse in concentration and the misfortune of accidentally turning the ABS off during the driver change – I locked the rear tires doing 235 km/h and spun into a Porsche. We were both able to drive off, but my mistake compromised his race and obviously also my team's race. I was so angry at myself, not just for the crash itself but also for not being able to get over it and settle into a rhythm afterwards. I needed to get over it and bounce back and my second stint did just that."
While the opening lap of Guindi's international race career didn't go to plan, the Mexican ace bounced back with strong performances in his next two stints.
"I went out on track with 20 minutes of night time to go and got to witness the sunrise over the course of the two-hour stint," said Guindi. "I was really happy with that stint. The lap times were really fast and consistent. I made no mistakes and did great progress on catching up to the eighth placed car. The third and final stint was simply about bringing the car to the finish. The highlight of the stint was being given the amazing opportunity of taking the flag to finish off a 24-hour race."
Guindi became the second Mexican winner of the GT Academy competition last year, following the footsteps of his Dubai teammate, Ricardo Sanchez.
"I didn't expect to get emotional but I started crying halfway through the last lap," said Guindi. "I still don't know why I was crying – maybe three months of work culminating in that moment or maybe just the feeling of finally truly understanding the source of everyone on the pit wall's shared passion. This concludes only the first chapter of my journey, and I can do nothing but wholeheartedly thank everyone involved including GT Academy, Nissan and NISMO who make this dream possible."
CREDIT: http://nissannews.com/en-US/nissan/usa/releases/bittersweet-day-for-nissan-370z-gt-academy-crew-at-dubai-24-hour
CATEGORIES »
News , Racing ,
TAGS »
370z , Dubai , GT Academy , nismo , nissan , nissan racing , race cars , racing ,
SHARE »
Share
Tweet