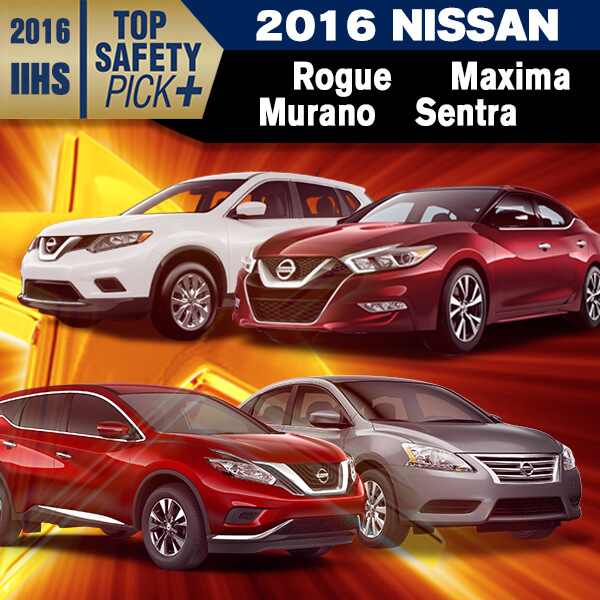 IIHS awarded the all-new 2016 Nissan Maxima a "Top Safety Pick Plus" (TSP+) safety rating, which is the group’s highest designation. The 2016 Nissan Maxima joins the previously announced 2016 Murano with the TSP+ rating. The Maxima scored "Good" in all five TSP categories and earned TSP+ status with a "Superior" rating for front crash prevention for those models equipped with Forward Emergency Braking.

The 2016 Nissan Sentra joins the 2016 Rogue in earning an IIHS "Top Safety Pick" rating. The 2016 Sentra, which goes on sale in January, will offer Forward Emergency Braking. Once that system is tested by IIHS the Sentra has the potential to be upgraded to a TSP+ rating. Nissan’s top selling 2016 Altima will undergo IIHS testing next month with the possibility of achieving a TSP+ rating as well.

"Nissan is proud to again have our core vehicles recognized by IIHS for vehicle safety," said Pierre Loing, vice president, Product Strategy and Planning, Nissan North America, Inc. (NNA). "The new Maxima, like the Murano, is setting high standards in its class for styling, performance and interior refinement. The 2016 Nissan Rogue and Sentra demonstrate Nissan’s commitment to high quality and safety standards, and we are gratified that these outstanding vehicles have been recognized for excellent design."

For this year, IIHS has tightened its standards by requiring a "Good" or better rating in all five of the crashworthiness categories to earn a "Top Safety Pick" and making an available front crash prevention system mandatory for all awards. To earn the IIHS "Top Safety Pick Plus" designation, a vehicle must earn a "Good" or better on all five crashworthiness categories and also receive an "Advanced" or "Superior" rating for front crash prevention.

Maxima offers Around View® Monitor (AVM) with Moving Object Detection (MOD) system that features four small superwide-angle cameras mounted on the front, sides and rear of the vehicle that provide a "bird's eye" virtual 360° view around the vehicle. It provides additional selectable split-screen close-ups of the front, rear and curb views, helping the driver maneuver the car in or out of tight spots. Rear Cross Traffic Alert helps alert the driver of an approaching vehicle when backing out of a parking spot.

Moving Object Detection builds on the capabilities of the AVM system, helping enhance the driver's situational awareness by providing visual and audible warnings (front, side or back range object detection) if the system detects moving objects (such as another vehicle) within the displayed image in situations such as pulling out of a parking space. Using sophisticated image processing technology, the system detects moving objects within the virtual "bird’s eye view" (when the vehicle is in Park). When starting off or backing up, it detects moving objects crossing within the front or rear views, respectively.
Want your own super safe Nissan? Visit any one of seven local San Diego Mossy Nissan’s and Drive Better for Less! or SHOP ONLINE NOW!
CREDIT: http://nissannews.com/en-US/nissan/usa/releases/insurance-institute-for-highway-safety-awards-top-safety-designation-to-key-nissan-models-for-2016