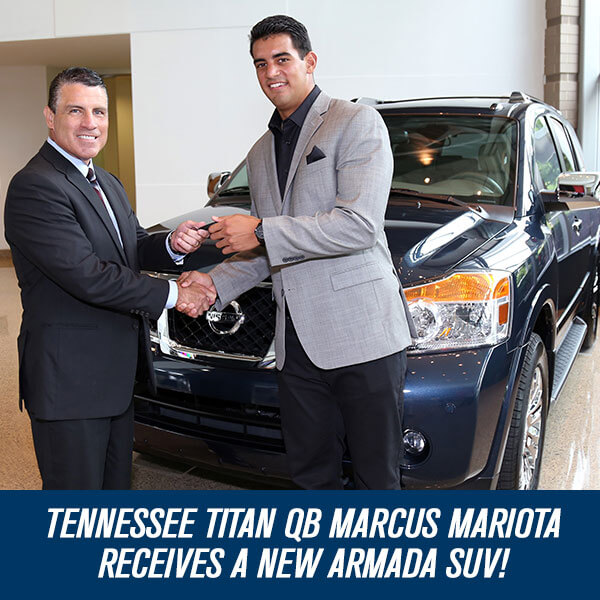 NASHVILLE, Tenn. – When Marcus Mariota stepped on the stage at New York's Best Buy Theater last December to accept the Heisman Trophy, he joined what is arguably one of the most exclusive clubs in all of sports – those who have hoisted the iconic 45-pound trophy.

As part of the Heisman House campaign, Mariota joins 13 other former Heisman winners, in a series of broadcast and social media vignettes set to air throughout the upcoming college football season. The first featuring Mariota are scheduled to air beginning Thursday, Sept. 3.

"On behalf of all Nissan employees, we are pleased to welcome you, Marcus, to the Heisman House. We hear you more than held your own against some of the Heisman veterans during the production of the spots," said Fred Diaz, senior vice president, Sales & Marketing and Operations, U.S.A., Nissan North America, Inc., at the presentation. "We also want to extend a heartfelt welcome to Nashville and to our Nissan family. Your new Armada will look right at home parked at Nissan Stadium."

Now entering its fifth year, the popular Heisman House marketing campaign features a series of video vignettes, a traveling college campus/stadium tour and social media elements, including the opportunity for fans to vote online for their favorite Heisman Trophy candidates. In 2014 Nissan's official crowed-sourced vote, with more than 400,000 participants, went to Mariota.

Nissan's relationship with the Heisman Trophy Trust began in 2006. In the company's role as a premier partner, Nissan supports the Trust's charitable activities and mission of service to our youth, especially those disadvantaged or afflicted.

Mariota recently signed a contract with the Tennessee Titans. He received 90.9 percent of the total possible points in the Heisman vote, the second highest all time. He also led Oregon to the National Championship game against Ohio State. Mariota complied a career 36-5 record at Oregon and was the second player selected in the 2015 NFL draft.

For information about the complete lineup of 2015 Nissan vehicles, please visit us at MossyNissan.com now or come in to one of seven local San Diego Mossy Nissan’s today!