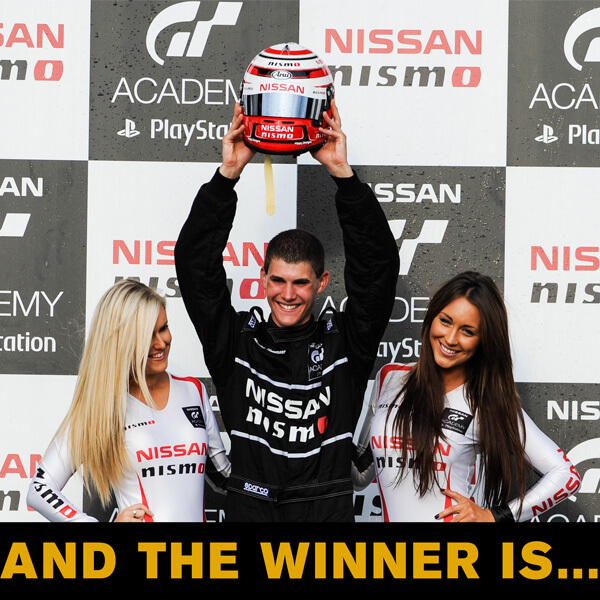 For a kid who grew up in the shadow of one of America's most beautiful racing circuits, this win was the culmination of one dream and the beginning of another. Nicholas Hamman of Elkhart Lake, Wisconsin outlasted 11 finalists at the legendary Silverstone circuit in England to be crowned the 2014 Nissan GT Academy North American champion.

This year's finals began with Hamman winning the first competition on the strength of his distance running and closed with a dominating performance in the four car head-to-head shoot out in Nissan 370Zs on Silverstone's road course.

“The whole thing has been an awesome experience for me,” said the 21-year old Hamman. “I can't thank everyone at Nissan, Sony PlayStation and Silverstone enough for giving me this opportunity and believing in me.”

Hamman is no stranger to motorsports. He grew up a stone's throw from Road America, arguably America's most picturesque and challenging road course in Wisconsin. As a young boy, Nic worked with his dad in the shop and started driving a go kart at home by age six. By the time he was 12, Nic was racing go karts locally with great success. He won three local karting titles in his teens, giving him the desire to move up to bigger, more expensive rides.

“It takes a lot of money to do any kind of professional racing,” said Hamman. “What GT Academy and Nissan have done is give someone a shot at racing top-notch racing cars with professional mechanics and pit support without the financial windfall that kind of thing requires. I am so grateful to be able to do this, and I can't wait to get to my first professional race in January.”

That first event will be the Dubai 24 Hours on January 8-10, where Hamman will team up with two other GT Academy winners and a Nissan pro driver in a Nissan GT-R GT3 race car. Hamman calls the GT-R racer's brakes “phenomenal.”

He and his teammates will fly to Dubai on January 1 to prepare for the annual endurance race. GT Academy teams have had great success at Dubai since 2011, grabbing a class win last time out in a 370Z racer, along with two podium finishes in previous years. Since 2009, GT Academy winners have won numerous professional races, stood on podium at the prestigious LeMans 24 Hours, and won International endurance racing championships.

Since his GT Academy win in September, Hamman has remained in Europe earning his competition license by running 14 club races on sports car tracks and earning the approval of race stewards. He is also doing daily physical training with the other NISMO Athletes at Silverstone, a part of the program he doesn't mind at all.

“I wake up every day with a smile on my face, ready to go work out and get more track time and training,” Hamman admits. “Even in quiet times sitting in the car ready to go out, I'll reflect on how fortunate I am to get to do this. Now I just have to go out there and prove they made the right choice. I will be racing with the big dogs, starting with Dubai next month.”