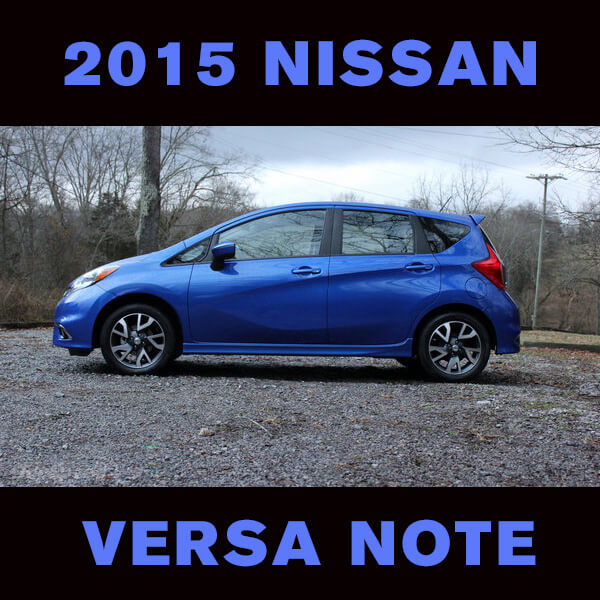 Original Review by Christine Moe from Top Speed.
When Nissan brought me its most affordable hatchback, the 2014 Versa Note, earlier this year I found myself impressed with its nimbleness, abundant interior space great features despite its bargain price. In general I recommended it as a great bargain runabout. For 2015, Nissan has the new sportier looking Versa Note SR, and the automaker sent it my way for a week of testing (read: flogging). The new car has revised visual cues inside and out, and the equipment list is a little different than my last Versa. Best yet, it's even a little cheaper than the last one I tested as well.

Does the new looks and revised interior make this car even better than the old model? Does the lowered price and reduced equipment options make it a better deal or a drearier place to spend time? Did that CVT magically get any better?

The 2014 Versa Note soft curves and sculpted shapes made it look far more handsome than a tall hatch with flat-sides should be allowed. With the new SR, Nissan added a lot of small changes to the outside that combine to make a huge difference. The grille is a dark diamond mesh pattern that looks a lot classier than the long horizontal stripes of my last tester, and the headlamps have been modified ever so slightly. The outside amber reflector on the headlamp has been moved down and widened slightly. It is a tiny change, but it more closely follows the angles and lines of the car to make the front end look a little more aggressive.

The SR features a whole new front bumper that sees the flat and boring horizontal body line shaped into a “vee” that mirrors the angles of the upper grille. The lower grill has a more three-dimensional look with a new front lip and lateral cuts that frame the revised fog light housings. There is more black diamond mesh in the lower grille, and the fog lights now have black surrounds with sharp chrome trim highlighting the top and outer edges.

Down the side of the Versa you can see the new side-view mirrors that are one of my favorite changes to the exterior. The old models were large and bulbous round units, but the 2015 SR arrives with squared units that look more aerodynamic and interesting. There is a large and thin LED strake that runs through the front of the top-third of the mirror to act as an indicator light and it really shows of the new sculpting and shape of the mirror housing. To match the new nose there is also an aggressive side skirt that runs the profile of the Versa SR. The alloy wheels of the SR are also new with an exclusive and stunning two-tone silver and black color scheme coupled to a split-spoke design. They are 16 inches in diameter, same as the last model.

The tail of the Versa Note SR gets the same level of attention that the rest of the exterior does. The new rear bumper is wider at the bottom, giving the car a more square and planted visual stance, and there is a plethora of new cuts, sculpting details and trim changes. The bottom of the bumper tucks up into a visual representation of a diffuser that is made from a carbon-look plastic of surprising quality. TO the outer edges of that trim, there are sculpted cuts that mirror the new shape of the fog light housings in the nose. To finish the new go-faster styling, there is a spoiler mounted to the top of the hatch. It's not as large as the one you will find on the Fiesta ST, but its dual hump design is attractive.

Driving the 2015 Versa Note SR, unsurprisingly, was just like driving the 2015 model. That isn't a bad thing though. The car isn't equipped with a set of race-spec coilovers, but its lower ride height and stretched wheelbase do create a platform that is more fun than you would likely give it credit for. There is a fair bit of body roll, but once the weight transitions, the car will stick and sling your through a corner. If you are good with some late left-foot braking you can even get the tail to step just slightly.

Understeer can be an issue at the absolute limit but during normal brisk driving, it isn't a problem in most situations. The engine is small, and mounted fairly far back in the nose between the wheels so the amount of weight on the nose is reduced, thereby reducing its tendency to understeer you straight into a tree around that one banked hairpin you love so much.

When you aren’t trying to set a new back-road record, the Versa Note SR settles into a competent commuter machine. NVH inside the cabin is more hushed than you would expect from a car in this price range and the seats are plenty supportive for longer drives. The stereo is not the greatest-sounding thing in the world, but it serves its purpose well and smartly placed controls make it easy to operate when on the move without taking your eyes off the road. Nissan was even kind enough to include a text-messaging assistant that is designed to read incoming texts aloud to help curb the pandemic problem of texting while driving.

When driving around in tighter urban areas, the large windows, upright seating position and tight turning circle are huge bonuses. The steering is also better in the city than out on the great wilds of rural America with its quick action and light weighting.

The 2015 Nissan Versa Note is available at all 7 Mossy Nissan locations in San Diego.