Watch Adam Levine and the 545 horsepower Nissan GT-R on The Voice TONIGHT! 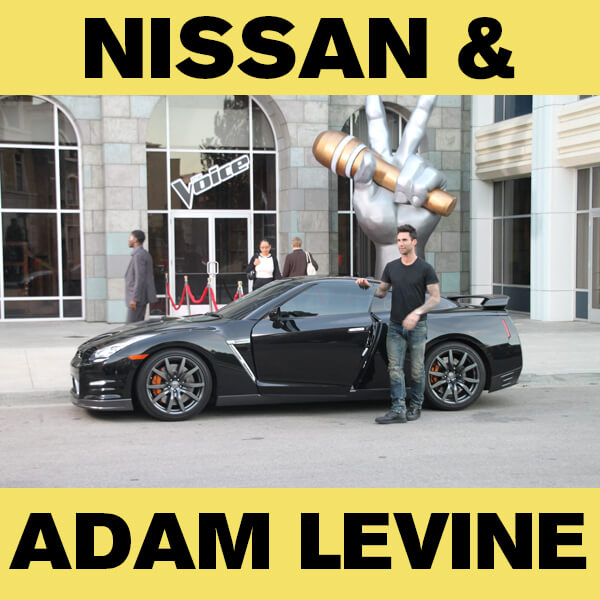 The first vignette, debuting during the Nov. 18 episode of "The Voice," will feature Adam Levine giving viewers their first chance to hear a live rendition of "SUGAR" from the new Maroon 5 "V" album while in the middle of a unique driving experience that only Nissan's 545-horsepower supercar, the GT-R, can deliver. This vignette can also be viewed online at NBC.com/Nissan on Nov. 18. The remaining vignettes featuring season seven artists and a variety of Nissan products will air on Nov. 25 and Dec. 2.

"We are excited to work closely with Adam and the talented artists on this season of 'The Voice' to deliver new experiences for fans and our consumers," said Fred Diaz, senior vice president, Nissan Sales & Marketing and Operations U.S., Nissan North America, Inc. "Expanding on Nissan's partnership with NBC's 'The Voice' is yet another way the brand is reaching beyond traditional advertising and marketing programs to connect directly with our consumers."

As part of the expanded sponsorship, Nissan is also hosting the "Nissan Talent Drive" to give fans the opportunity to win a trip to "The Voice" finale in Los Angeles as well as a front-of-the-line auditions pass for a future season. Fans in Nashville (Nov. 11 at the historic Ryman Auditorium) and Los Angeles (Nov. 17-18 at the Universal CityWalk) will have the chance to sing in the backseat of a Nissan Rogue. The top three entries chosen by a panel of judges from Nissan and "The Voice" will be posted onFacebook.com/NBCTheVoice from Dec. 1–5 for America to "turn their chair" and choose one ultimate winner. Facebook voters will be automatically entered to win a sweepstakes that will send one voter to "The Voice" finale as well.

In September, NBC Universal introduced Nissan as the exclusive automotive sponsor for the next three seasons of "The Voice."

NBC and Nissan's innovative partnership was created to drive excitement for "The Voice" fans through on-air custom content integrations, digital and social media activations and online at NBC.com. Nissan-sponsored elements include:

"The Voice Official App" powered by Nissan enhances the viewer experience across the show from the blind auditions, "Battles," "Knockouts," and all the way to the live playoffs, giving fans, for the first time, the ability to use the app to vote for their favorite artists live during the broadcast of the show. "The Voice Official App" is available on the App Store or by downloading on Google Play.
Official sponsorship of "The Voice Tailgate," a behind-the-scenes, pre-show social media event where fans will have the opportunity to interact on social media with artists, coaches, guest performers and other celebrities. Viewers, who log-in for the tailgate party, are rewarded with behind-the-scenes social content, including exclusive photos and video from The Voice.

Nissan's partnership with "The Voice" was developed in conjunction with OMD & TBWA\Chiat\Day. "The Voice" airs on NBC on Monday and Tuesday at 8 p.m./7 p.m. CST. For more information, visit http://www.nbc.com/the-voice.