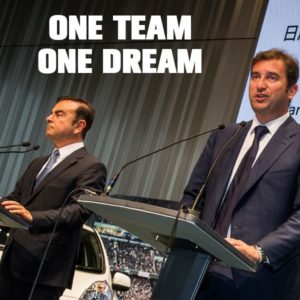 The Nissan CFG partnership will see Nissan become the Official Automotive Sponsor of Manchester City Football Club and enjoy a strong brand presence at the Club's famous Etihad Stadium, complemented by fan engagement opportunities targeting City supporters all over the world. This will sit alongside unique rights packages in the territories of each of CFG's network of football clubs.

The collaboration follows the previous agreement between the two organizations, announced in May of this year, which saw CFG assume a minority stake in the Nissan owned Yokohama F-Marinos and commit to provide its knowledge, expertise and services to the J-League club through the City Football Services and City Football Marketing companies.

"Nissan has always been immensely proud of its place in Yokohama F-Marinos history and is now privileged to be part of the story of CFG and their network of fantastic global football teams," said Carlos Ghosn, Nissan President and CEO. "This innovative partnership enhances Nissan's investment in the game of soccer which is a key platform to further strengthen our brand globally. Additionally, the value in kind deal will see Nissan introduce the world's best-selling electric vehicle to the world's fastest growing football team, an example of how the collaboration will pair innovation with innovation to bring the excitement of Nissan and soccer to customers around the world."

Khaldoon al Mubarak, Chairman of City Football Group, commented: "We are delighted to be working with Nissan as CFG's first group-wide global partner. Nissan is a leader in innovation and sustainability, values which are also at the heart of our own organization. Through our investment in, and support of, the Yokohama F-Marinos, it has become very clear that Nissan and CFG also share a common passion and ambition for further growth and development. As a result, this new partnership presents us both with incredibly exciting opportunities to collaborate through football both in Japan and across the world."

Including one of the world's fastest growing football clubs in Manchester City FC, the CFG network of football clubs represents an excellent business platform for Nissan as it continues to expand its association with football worldwide. The recent signing of global football star, David Villa, will see the Spanish international play for New York City FC and in Melbourne as a guest player, reflecting the potential of the network's unique business model and driving huge excitement around the new season for both clubs.