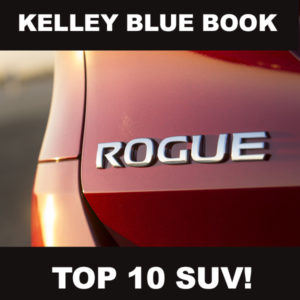 NASHVILLE, Tenn. - Noting its "refreshing new sense of style" among other attributes, the editors of Kelley Blue Book's KBB.com have named the all-new 2014 Nissan Rogue to their annual "10 Best SUVs Under $25,000" list.

This accolade confirms the attention that the 2014 Rogue has already received from customers - in its first full month of availability, sales of the 2014 Rogue were up 27.8 percent. This late-game sales charge capped a banner year for Nissan's second best-selling vehicle, with 162,751 units sold overall in 2013.

For mid-size SUV buyers, KBB.com notes that the "2014 Nissan Rogue is actually one of the most practical choices on this list. Case in point, the all-new Rogue returns best-in-class fuel economy on the highway* thanks to an enhanced CVT transmission, while a newly available third-row seat ups the Rogue's people-hauling capacity to seven."

From Nissan's perspective, practicality and affordability are essential pillars of the Rogue's appeal. "The all-new Nissan Rogue was designed to offer customers an excellent value, while still providing drivers with unparalleled style, technology, drivability and function," said Dan Mohnke, vice president, Nissan Chief Marketing Manager & Marketing Operations. "Earning a place on KBB.com's list of 10 Best SUVs under $25,000 helps to reaffirm our vision for this vehicle as well as its place in an extremely competitive segment."

Exceptional passenger and cargo flexibility are provided by the EZ Flex® Seating System, along with the innovative, class-exclusive Divide-N-Hide® Cargo System (two-row models only) that can be configured 18 different ways for cargo storage and protection.

The 2014 Nissan Rogue is assembled in Smyrna, Tenn.