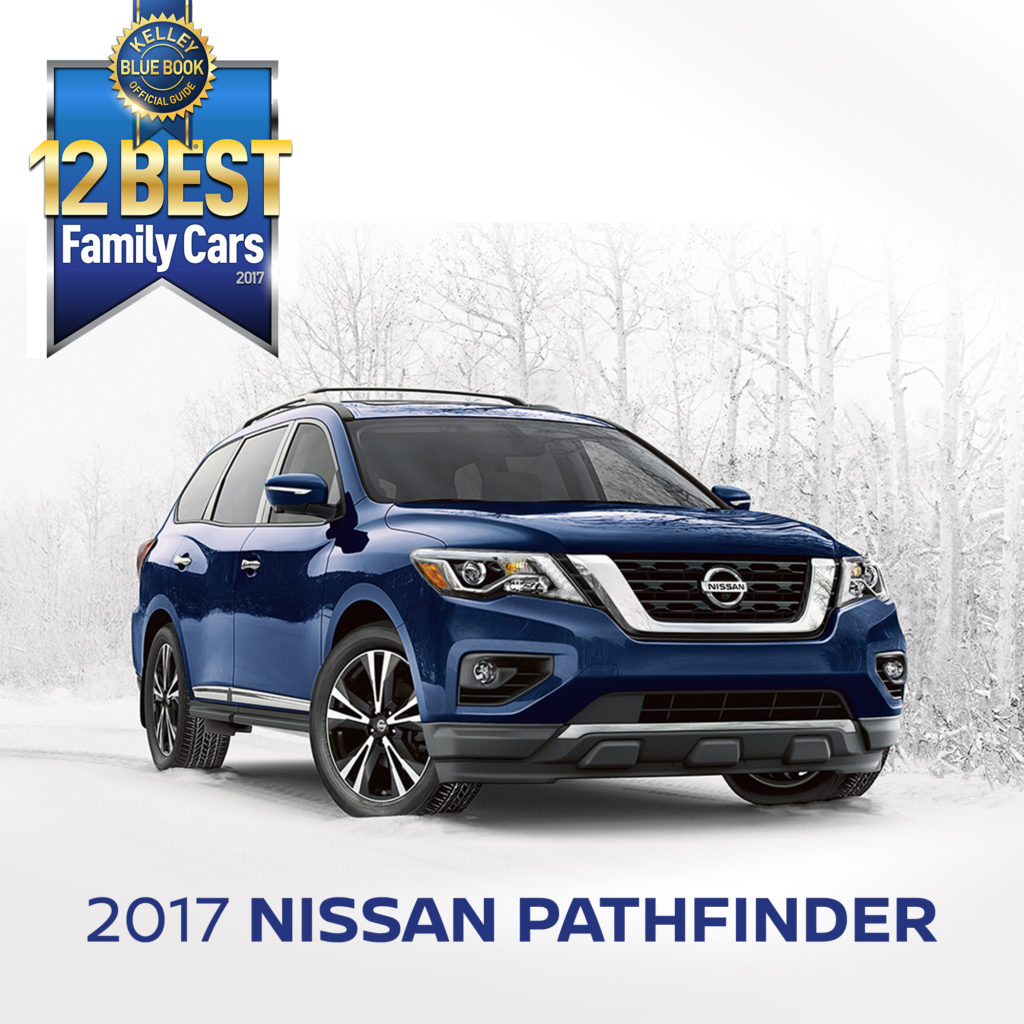 The 2017 Nissan Pathfinder has been named one of the "12 Best Family Cars of 2017" by Kelley Blue Book's KBB.com. It is the fourth consecutive year that Pathfinder has been included on the website's annual evaluation and selection of vehicles that "best meet the needs of today's families."

Editors credited Pathfinder for "playing a great inside game," writing: One of the most critical factors when considering a family-focused vehicle is its ability to please the people it carries. The Pathfinder scores high marks in that area thanks to a well turned-out and invitingly roomy cabin that's designed to facilitate quick, convenient transitions. Arguably the most notable feature on that front is Nissan's benchmark EZ Flex and Glide System. Standard on every model, it allows a child seat latched to either the Pathfinder's second-row split-bench or captain's chairs to remain in place when they're slid forward, greatly assisting access to the third-row bench.

KBB.com recommends that family car buyers take their children's car seats and boosters along when shopping to see how they fit and their ease of use with prospective vehicles.

"In a 3-row SUV like Pathfinder, access to the last row is critical in everyday use, both getting in and out of and negotiating around a child seat in the 2nd row," said Dan Mohnke, vice president, Nissan Chief Marketing Manager & Marketing Operations. "Our innovative 2nd row seat system, which tilts forward with a child seat still in place1, gives Pathfinder a big advantage over other 3-row designs, even before shoppers get behind the wheel for a test drive."

About the 2017 Nissan Pathfinder

Pathfinder, one of Nissan's best known and most popular nameplates in its nearly 60-year history in the United States, was reborn for the 2017 model year with more adventure capability, a freshened exterior look and enhanced safety and technology – pure Pathfinder taken to an even higher level of performance, technology and style.

The changes for the new model year began from the A-pillars forward – both with revised sheet metal and the re-engineered 3.5-liter V6 under the new hood design. The new Pathfinder engine utilizes more than 56 percent new or new-to-Pathfinder engine parts and components – including combustion chamber design, pistons, intake manifold and e-VTC (fully electronic on intake).

Pathfinder's refreshed exterior for 2017 provides a stronger sense of adventure character and presence by adding Nissan signature design elements, such as the new "V-Motion" grille and boomerang-shaped headlights with LED daytime running lights. Another significant addition for 2017 is the available Motion-Activated liftgate with liftgate position memory, which is standard on SL and Platinum grades.

The new 2017 Pathfinder is available in 4WD and 2WD drive configurations and in four models: S, SV, SL and Platinum. It is assembled in Tennessee.