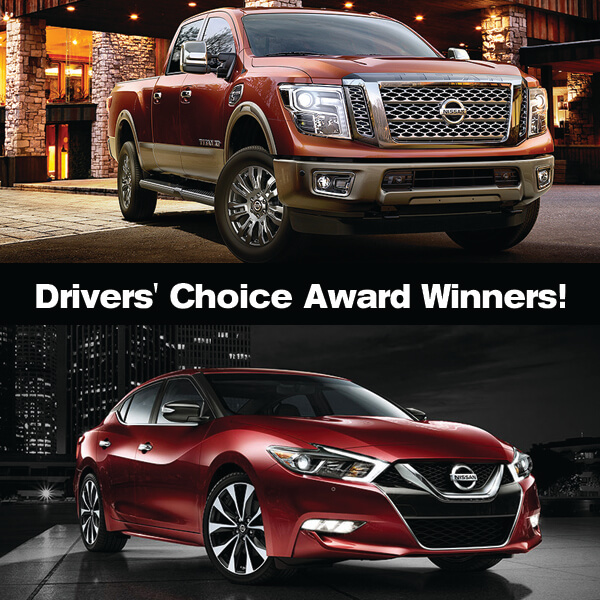 CHICAGO – Two Nissan flagship vehicles, the all-new TITAN XD full-size pickup and the Maxima sports sedan, were announced today as category winners of theMotorWeek's 2016 Drivers' Choice Awards at the Chicago Auto Show. TITAN XD, Maxima and the other Drivers' Choice winners will be featured in a special episode ofMotorWeek, which will air on public television stations nationwide beginning February 12, 2016, and on cable's Velocity beginning February 23, 2016.

In selecting the TITAN XD for its latest in a string of recent media honors, MotorWeeksenior executive producer and longtime host John Davis reported: "The Nissan Titan XD is indeed a 'heavier' duty version of the second generation Titan full-size 'light duty' pickup truck. It's all-new all around, with vastly increased capabilities. Despite the domestic dominance of the full-size truck market, this TITAN shows Nissan is not quitting, and in fact has found a way to brilliantly cover a niche that their bigger rivals have ignored."

Regarding the 2016 Maxima, the eighth generation of Nissan's popular "4-Door Sports Car," Davis said: "The redesigned Nissan Maxima is one of the most stimulating sedans we've come across in years. It's rakish and radical. But the big deal here is that despite both its front-wheel drive nature and CVT automatic transmission, it manages to stand out as a true sport sedan performer."

The 2016 Nissan TITAN XD is anchored by a powerful 310-horsepower Cummins® 5.0L V8 Turbo Diesel and mated to a heavy-duty 6-speed Aisin automatic transmission, and has a maximum towing capacity rating of more than 12,300 pounds when properly equipped.

The TITAN XD is the flagship of a complete family of Nissan TITAN full-size pickups and is offered in five grade levels: S, SV, SL, PRO-4X and Platinum Reserve. Overall, the TITAN lineup will include three cab configurations, two frame sizes, three powertrain offerings and five grade levels. The additional TITAN models will begin rolling out this spring, eventually offering models that will compete in more than 85 percent of light truck segments. The 2016 Nissan TITAN XD is assembled in Canton, Mississippi, with engines assembled in Indiana and Tennessee (5.0L V8 Turbo Diesel and 5.6-liter Endurance® V8 gasoline engine respectively)

The 2016 Nissan Maxima sets the standard for style, performance and technology in the large sedan segment. Its groundbreaking presence is also intended to "Maximize" the Nissan brand itself – as a halo vehicle showcasing the company's cutting edge design, performance and innovation leadership. Helping Maxima push the performance envelope in its segment is a completely revised 300-horsepower 3.5-liter VQ-series V6 engine and new performance-oriented Xtronic transmission.

The 2016 Maxima is available in five well-equipped models (all equipment is grade standard, no available options): Maxima S, SV, SL, SR and Platinum. It is assembled in Smyrna, Tennessee, with engines assembled in Decherd, Tennessee.

For more information on the 2016 Nissan TITAN XD and 2016 Nissan Maxima visit your local Mossy Nissan or SHOP ONLINE NOW AT MossyNissan.com

Total Loan Amount:
$
Monthly Payment:
$
*Payment does not reflect or include Sales Tax or Fees. See Dealer for full details