Where Can Your Nissan Take You? 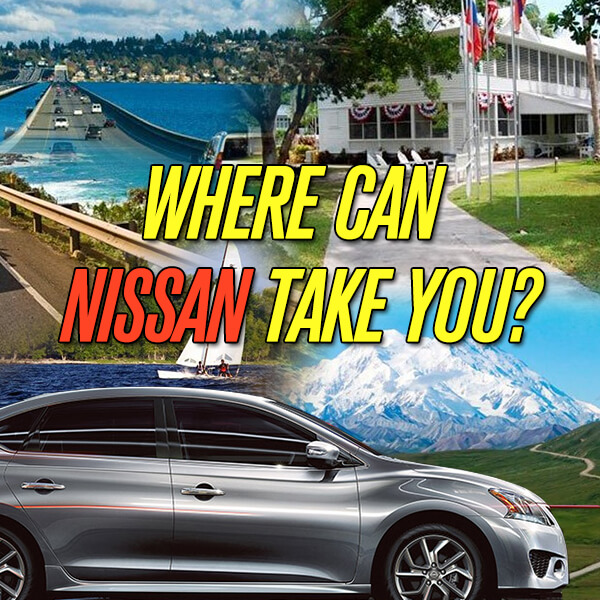 What better way to take an affordable vacation than to go for an All American Roadtrip? New routes and tried and true destinations are calling! Get packin', prep your music playlists, and get ready to adventure!

A drive on the Mother Road (now known as I-40) is often at the top of a road trippers' bucket list, but this year the iconic route has a new twist. Last October, a strip of "musical road" was installed near the village of Tijears, east of Albuquerque. A series of rumble strips on the highway is calibrated so if you drive the speed limit (45 mph), the vibrations in your car buzz to the tune of "America the Beautiful."

Start your drive in Albuquerque, where you can still spot neon Route 66 signs downtown, then cruise east through the Cibola National Forest until you reach Tijeras and the singing road. Continue on to Moriarty, where you'll see some Route 66 relics, such as the Sunset Motel and some old bars. The road only plays music if you're driving east, so be sure to start in Albuquerque and not the other direction.
HUNT FOR FOSSILS ON THE DINOSAUR DIAMOND SCENIC BYWAY

A prehistoric pairing for this summer's film release of Jurassic World, this route loops through Utah and Colorado, taking in some of the west's top dinosaur sites-plus some killer scenery. Start your trip on the Colorado side, in Grand Junction, and drive northwest to the aptly named town of Dinosaur. Spend a few hours at Dinosaur National Monument, where you can see live digs and a paleontology lab.
HONOR CIVIL RIGHTS HISTORY ON THE SELMA TO MONTGOMERY NATIONAL HISTORIC TRAIL
Start: Selma, Alabama
End: Montgomery, Alabama
Distance: 54 miles

This National Scenic Byway traces the 54-mile route followed by civil rights demonstrators in the 1965 Selma to Montgomery Voting Rights March, which celebrates its 50th anniversary this year. Start in Selma, spending a few hours exploring the small Alabama town that took center stage in the fight for voting rights. Then follow U.S. 80, crossing the arched Edmund Pettus Bridge, site of the violent clash between marchers and law enforcement known as Bloody Sunday.

The drive to Montgomery continues east through rural countryside, passing farms and churches that served as campsites for the marchers, and an interpretive center at the site of Tent City in Lowndes County. The final five miles of the route follow busy streets through Montgomery to the Alabama State Capitol. Be sure to leave time to see other civil rights monuments around the city, including the Rosa Parks Library and Museum and the Civil Rights Memorial. To commemorate the anniversary this year, the state will be hosting reenactments, plays, and special events along the route.

Seven score and ten (so, 150) years ago, Confederate General Robert E. Lee fled from Petersburg, Virginia, with Union troops in hot pursuit. His journey, which ended in surrender at Appomattox and prompted the end of the Civil War, is now a well-marked driving route that's being commemorated with special anniversary events this year.

Start at the Petersburg National Battlefield Park Visitor Center to pick up a map of the route. Here you can learn about the 9.5-month siege that caused 70,000 casualties. The town's Siege Museum also has a permanent exhibit about the civilian experience during the war. The route then meanders west through farmland, past more historic sites such as Pamplin Historical Park and the National Museum of the Civil War Soldier and Sailor's Creek Battlefield Historic State Park. The drive, like Lee's campaign, ends in Appomattox, where you can visit the famous courthouse where the general surrendered 150 years ago.

Low gas prices make this summer a great time to take off on that coast-to-coast road trip you've always dreamed about. And if you're going to drive across the country, you might as well take the long route: I-90, which connects Boston to Seattle along the longest interstate in the U.S.

You'll pass through thirteen states, dropping down around the Great Lakes, then up across the Great Plains and the Continental Divide. You could do the drive in about six days, but it's best to take your time and make detours to some of the nation's top sites along the way, including Niagara Falls, Mount Rushmore, and Yellowstone National Park.

Where Can Your Nissan Take You? - Mossy Nissan