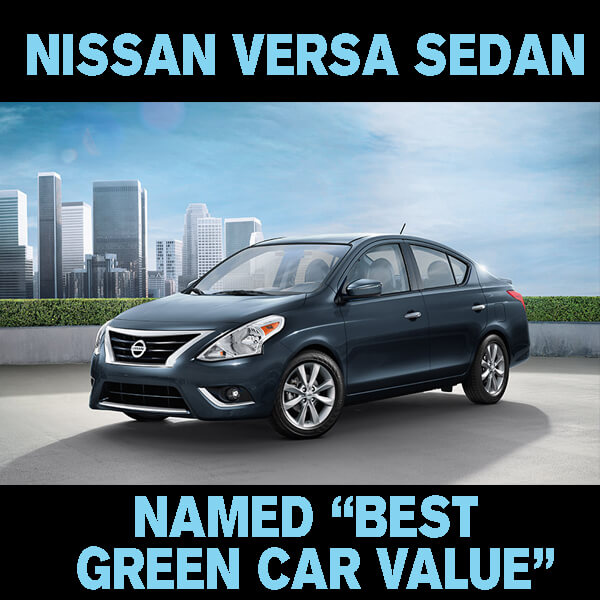 Now in its fifth year, the Green Car Guide closely examined more than 80 new vehicles in 13 different categories including: braking, fuel economy, emissions, handling, ride comfort and others. Each vehicle was awarded up to 10 points in each category. The total score was then divided by its "as-tested" price to determine cost per point. Standing out as the best value in the test, the Nissan Versa Sedan took the top honor with a better cost-per-point score than any other vehicle in the field. Its hatchback stablemate, the Nissan Versa Note, finished a close second.

"The center (Automobile Club of Southern California's Automotive Research Center) has a long-term interest in helping motorists cut their fuel bills and clean the air," said Automotive Research Center Manager Megan McKernan. "Green vehicles offer motorists a way to reduce emissions and save fuel and, depending on the choice of green vehicle, can help motorists save cash, especially when gas prices are high."
Since its debut 10 years ago, the Nissan Versa continues to excel in the sub-compact segment by offering customers an extremely fuel-efficient vehicle at a low starting price. Versa is powered by a 1.6-liter inline 4-cylinder, and when equipped with an Xtronic transmission, highway fuel efficiency is rated at 40 mpg. This configuration receives a 31 mpg rating in the city and 35 mpg combined rating by the EPA.

"With a starting price of $11,990, the Nissan Versa Sedan is one of best values on the market today and even more economical with up to 40 highway miles per gallon*," said Fred Diaz, senior vice president, Nissan Sales & Marketing and Operations U.S., Nissan North America, Inc. "It's an honor to be recognized by the AAA as 'Best Green Car Values' for Versa Sedan and Versa Note."

The 2015 Nissan Versa Sedan is offered in four trim levels - S, S Plus, SV and SL – and three transmission options including a 4-speed automatic, 5-speed manual and Xtronic transmissions. The companion vehicle to the popular Versa sedan, Versa Note celebrates the unique qualities of its 5-door hatchback design. It shares its advanced platform and drivetrain with the Versa sedan, yet Versa Note has its own distinctive look and feel inside and out.

Nissan was named most fuel-efficient full-line automaker by the Environmental Protection Agency in 2014. With an average fuel economy of 26.2 mpg among its 2013 lineup, Nissan soared to the top, besting the runner-up by more than one mpg.

The fuel-sipping Versa – along with other efficient vehicles in the Nissan lineup – helped secure that accolade, which Nissan hopes to be in contention for again this year.

The comprehensive 160-page 2015 Green Car Guide can be downloaded via the AAA Magazine app in the Apple App Store or on the AAA web site and will also be available to members at AAA branches. Visit www.AAA.com/greencar for more information.