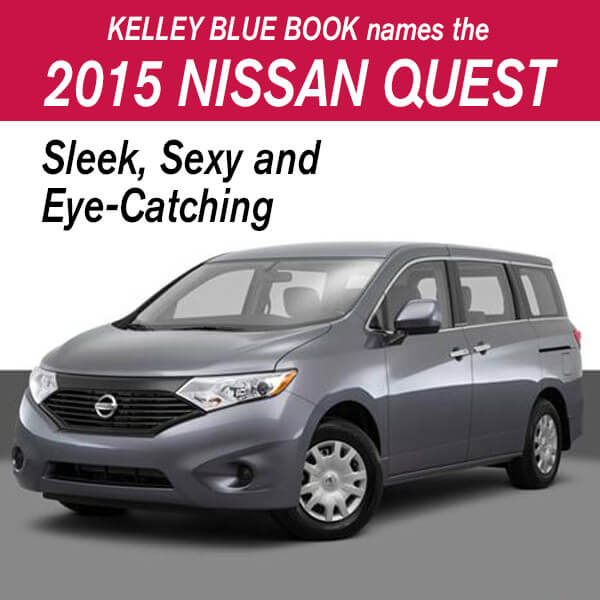 It may be impossible to make a sexy minivan, but the 2015 Nissan Quest may come closest. The eye-catching exterior style may not be everyone's favorite, but the luxurious interior looks like it was designed and built by Nissan's Infiniti luxury division, with contrast piping on the supremely comfortable seats, a sleekly styled dash, and plenty of quiet on the road. Combine that with gadgets like an available all-around-view camera, power-return 3rd-row seat and a clever hidden cargo compartment, and the Quest makes a good case on the practical side against segment leaders like the Honda Odyssey and Toyota Sienna. While it only offers seating for up to seven passengers, if that's all you need, the Quest is worth a look.

If your family is growing, and you don't like seeing yourself coming and going everywhere you go, then the 2015 Nissan Quest may be just the ticket. With its luxurious interior and unique exterior styling, the Quest is a nice upgrade from the standard minivan fare, without sacrificing practicality.

What's New for 2015
The 2015 Nissan Quest adds a few noteworthy enhancements, most notably an improvement in fuel economy and a reprogrammed transmission. Last year's LE model is now known as Platinum, and the Around View monitor now gets moving-object detection.

Driving Impressions - The 2015 Nissan Quest's already good fuel economy gets better thanks to changes to the van's unique-for-the-class continuously variable automatic transmission (CVT). Now boasting 20 mpg in the city, 27 mpg on the highway, and 22 mpg combined, it actually beats the Honda Odyssey in the city, and ties it in its combined rating, making it one of the most fuel-efficient minivan choices available. The Quest's 260-horsepower V6 engine makes acceleration a breeze, and the transmission's new programming is designed to make it more responsive when you put your foot down. The luxury-car-inspired interior feels like it carries over into the steering and suspension, neither of which is as sharp as we'd expect in a Nissan, but the smooth ride and quiet on the highway make for a more than acceptable compromise, especially considering this van's primary duty of hauling kids and family in comfort.

FAVORITE FEATURES:
INTERIOR
We're not kidding about this whole "interior by Infiniti" stuff. The leather seats come with contrast piping and are incredibly soft thanks to a dual-layer cushion, essentially a pillow-top design. It looks good too, with color-coordinated schemes and tasteful use of metallic trim geared more toward discerning adults than kids.

CVT (CONTINUOUSLY VARIABLE TRANSMISSION)
The CVT in the Nissan Quest is unique to the class, and its seamless shifts and immediate power delivery are part of the reason why this van is so easy to live with.

Interior
The 7-passenger Nissan Quest offers handsomely appointed seats and a premium feel, yet it still offers most of the family-friendly fundamentals that sell minivans. Front- and 2nd-row passengers have plenty of head- and legroom, and 3rd-row space is still pretty good. Cargo utility is good, with a clever hidden cargo area behind the third row. The 2nd- and 3rd-row seats fold flat, like in an SUV, but at the expense of cargo volume. The shift lever got in the way of climate controls when in "D," and the power liftgate button is low on the dash and hard to find.

Exterior
Expressive. That's a good way to put the styling on the 2015 Nissan Quest. Whether you like its expression is a matter of taste, but there's no doubt that the Quest cuts a unique profile among its class. The high roof, squared-off rear, wraparound glass and huge chrome grille are all highlights. However, they also hide the fact that the Quest is neither as long nor as wide as its rivals, although the added height helps make the cabin feel roomy anyhow. Quest S and SV models get 16-inch wheels, while SL and Platinum models get 18-inchers.

Standard Equipment
The base Nissan Quest S minivan features 16-inch wheels, cloth seats, a 60/40-split folding 3rd-row seat, a 6-CD audio system and six airbags as standard equipment. It's better to start at the SV model, which adds fog lights, an audio system with a USB input, power sliding side doors, Bluetooth and a rearview camera. The SL adds 18-inch wheels, roof rails, a power tailgate, leather seats and an auto-dimming rearview mirror. Opt for the Platinum model and you'll get the Around View camera system, a power return for the 3rd-row seat, a hard-drive-based navigation system and rear-seat DVD entertainment.

Optional Equipment
Pretty much everything available for the Quest is distributed among the various trim levels, with few individual options. Exceptions include adding the DVD system to SV and SL models, a Bose audio package for SL models, and leather seats for the SV model. A dual-panel sunroof is available for the SL and Platinum models, although it oddly requires the addition of the DVD system in SL models.

All 2015 Nissan Quest models share the same 260-horsepower, 3.5-liter V6 mated to a continuously variable automatic transmission (CVT). This year, the transmission gets Nissan's D-Step shift logic, which simulates gear changes and provides for a more familiar driving experience. The transmission upgrades also contribute to a fuel-economy improvement that puts the Quest close to the class-leading Honda Odyssey.