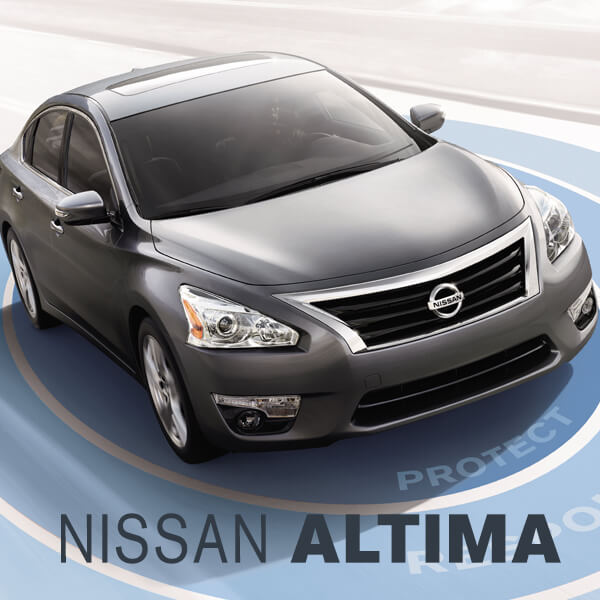 Strictly by the numbers, the Nissan Altima is doing great. As Nissan’s best-selling car in the U.S., the Altima ranks third in sales in the hugely competitive midsize sedan segment, right behind sales leaders like the Toyota Camry and Honda Accord.

But even these popular models had better watch their backs, considering that outlying competitors –such as the Mazda6, Chrysler 200, Kia Optima and Hyundai Sonata –are itching for a fight to the top.

Cars are more than numbers, however, and our initial impression of our Nissan test car’s 182-horsepower, 2.5-Liter 4-cylinder engine left something to be desired.  Our front-wheel-drive Altima SL seemed awfully noisy, especially if a long drive lay ahead. That initial impression faded away, thankfully, as the Altima showed off its sensible side (mixed with a touch of sportiness).

Our car came with Nissan’s upgraded continuously variable transmission (CVT) that delivers better fuel economy and less friction than before. The shift transitions are quiet, smooth, and barely noticeable.  With Nissan’s engineering improvements to the CVT, fuel economy is a workable 31-mpg city/38-mpg highway, or 27-mpg combined.  The Camry and Accord haven’t announced 2015 fuel economy, but our guess is the Altima will be best in class.

All SV and SL models are eligible for a Technology package that includes a seven-inch touch-screen with color display, navigation system, voice recognition and mobile apps.  Apps include Online Search powered by Google(navigation equipped vehicles only), Pandora(Android only – iOS coming soon), Facebook and iHeart Radio for Auto. The touch-screen produced clear images and functioned well during our test.

The Technology package also includes important passive safety features like blind-spot detection, lane departure warning and moving object detection –the latter shows moving objects at the rear when your car is in reverse.

During safety tests conducted by the National Highway Traffic Safety Administration, the Altima recorded a frontal crash rating of 5-stars for the driver, 4-stars for the passenger, and 4-stars during the rollover test. As of this review, there were no published results for side impact tests.

Those who demand swifter acceleration can look at the Altima with a 3.5-liter V-6 engine, which delivers 270-horsepower and 25-mpg in a mix of city and highway driving.

Nissan has paid the extra pennies to ensure the interior feels solid and comes with plenty of features.  The SL trim enjoys leather seating with power seats contoured to reduce pressure on the spine and fatigue on long drives. The latest Altima is also one of the roomiest cars in its class—enough so that a six-foot relative sat in the back seat very comfortably.

All Nissan vehicles are backed by an unremarkable 36-month/36,000-mile limited vehicle coverage and a 5-year/60,000-mile limited powertrain coverage.  The Altima’s residual value is around the segment average.

All of the midsize sedan segment's top sellers have received stylish updates, and the Nissan Altima is no exception.  The trapezoidal grille and projector headlights and fog lights give the front end a touch of excitement. The SL trim gets handsome alloy wheels, LED taillights, and a chrome tail pipe. All in all, the sloping roof line and raised trunk give the Altima a pleasing fluidity – even if the car’s omnipresence on the road means it’ll never turn any heads.

First impressions aren’t always spot-on accurate, as we discovered here. After spending more time with this Altima sedan, it proved to be a practical choice wrapped in a stylish, economical, and comfortable package.