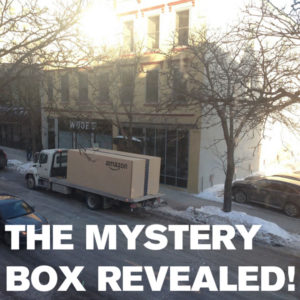 Giant Amazon delivery boxes were showing up on the door steps of unexacting customers over the holidays. Tons of speculation arose when it came to what was inside.
2014 Nissans Versa Notes were found inside!
"three Nissan Versa Note buyers were slated to receive their cars packaged in giant Amazon.com boxes, with video crews on hand to film the deliveries." 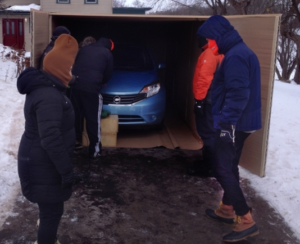 An interview with Erich Marx, Nissan North America's director of interactive and social media marketing provides further insight into this genus marketing scheme;
"Dumenco: So, Erich, what was in the damn box?
Marx: [laughs] A Nissan Versa Note, which is all-new for 2014. We did co-promotion with Amazon last fall, where we offered our customers and Amazon customers the opportunity to order a Nissan Versa Note through the Amazon website -- the first time anything like that's been done.
Dumenco: Right, I read about that in Auto News. So is this the first of multiple deliveries?
Marx: We talked about doing three this way. At this time we've done one of the three. We filmed it and we're actually editing the video that was shot this past weekend in Wisconsin. We're putting it together for what was supposed to debut as a social-media video next week, but we got beat to the punch with a spy photo, so we're talking to you today. That's just what can happen when you're delivering a box of that size -- it's not going to go unnoticed.
Dumenco: So there actually was a vehicle in that box?
Marx: Yes there was.
Dumenco: The person who got this, what did they do with all the cardboard? You know, that's a big box to have to fold up and put in the recycling.
Marx: [laughs] We were thoughtful enough that we helped him unload his Versa, and we took away -- our team took away -- the cardboard.
Dumenco: Any more details about the car itself?
Marx: I guess I can tell you that it is a blue Versa Note. The customer was thrilled with the delivery -- he had a good sense of humor about it. We delivered the Versa on Sunday, and he also got a $1,000 Amazon gift card to go along with it.
Dumenco: For the record, this wasn't literally purchased through or handled by Amazon, right? It's just an Amazon box, it's a co-marketing effort.
Marx: The actual purchase, the actual transaction, does have to take place with a dealer. We have wonderful dealers nationwide, and we want our dealers to have relationships with our customers.
Dumenco: What's amazing to me is that nobody got pictures of the unloading of the car.
Marx: We do have pictures of it being unloaded.
Dumenco: You should give them to me! The cat is out of the bag -- the car is out of the box -- so you should just give me the damn pictures.
Marx: [laughs] I'm not sure I'm allowed to share these yet. Again, we were taken off-guard a little bit. I mean, we understand the social space -- it's hard to keep anything secret. Having said that, we did not expect this to come out so broadly and capture the imagination like it has so quickly. We were planning, OK, we'll write up our release tomorrow, we're going to have the video ready on Monday -- we had this whole cadence.
Dumenco: Of course. Yeah, guess again, buddy.
Marx: [laughs] Exactly. Best-laid plans of the marketing guys."
CREDIT: http://adage.com/article/the-media-guy/unboxing-photo-giant-amazon-package/290947/
PHOTO CREDIT: