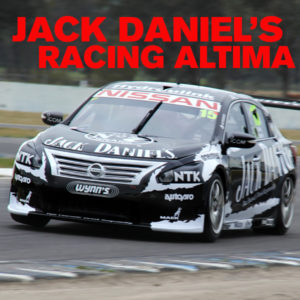 MELBOURNE, Victoria, Australia – Following a pair of promising rounds and a successful test day, the Jack Daniel's Racing Nissan Altimas are set for the first two-driver endurance race of the season, the Sandown 500.

Teaming up with Todd Kelly aboard the number 7 machine is Nissan factory driver Alex Buncombe, who will be making his V8 Supercars debut at the event.

The Brit tested with Jack Daniel's Racing at the season opening Sydney Motorsport Park test day, with the event following on from his debut in the Bathurst 12 Hour, where he partnered Rick Kelly in a Nissan GT-R Nismo GT3.

No stranger to endurance racing, Buncombe utilized the varied conditions at the recent Winton Raceway test day to familiarize himself further with the V8 Supercar Altima.

Rick Kelly meanwhile will team up with experienced co-driver David Russell, who is lining up for his fourth successive endurance race tilt with Jack Daniel's Racing.

Like Buncombe, Russell has extensive recent experience in GT3 competition, both domestically and internationally.

Both of the Kelly brothers have form on the board at Sandown, with Todd winning the 2003 Sandown 500 alongside Mark Skaife, while Rick was victorious in 2011 for Jack Daniel's Racing, when he blitzed the field in the wet, winning from pole position.

On track action kicks off on September 12 with three practice sessions, followed by a final practice, a 20 minute qualifying session and two 20 lap qualifying races on Saturday, ahead of Sunday's 500km long race.

"It's shaping up really well. There are a lot of positives in having Alex on board. It's a fresh approach to teaming up with someone who hasn't had a lot of miles in our cars. He's a perfect size as far as seat fit is concerned, we haven't really had to modify anything, the driver changes are good, and all of those things are shaping up well. Following our test day at Winton, where he had a little bit of dry and a little bit of wet running, practice starts and pit stops, all of the things he needs to know, he had a good run at. He got to the point where he was pretty comfortable in the car. I'm looking forward to Sandown; it's a good home event, and it's close to home and close to the race shop. Hopefully we can have a good clean weekend, the cars should be pretty good around that place, over the curbs and over the different sections of track, whether it's wet or dry. We're looking forward to it."

It's a fantastic opportunity for me. Thanks to Nissan and everyone involved who has been able to make this possible. I can't wait to get to Sandown for race weekend. It's been good to get a test in at Winton, and get a bit of experience in the car. We had both dry and wet weather running, and with a reasonable chance of getting those conditions at Sandown. It's good to have experienced the car in various situations."

"It's great to have Dave in the car. It's really good consistency for us. He has been with Jack Daniel's Racing now for a number of years, which is great. He's an absolute pleasure to work with and very handy in the car as well. It's an exciting time of year. I'm a big fan of the endurance season. Our Championship really is quite diverse. We're heading into three very different rounds now; in particular the Sandown event is an exciting one. 500km these days goes pretty quick, so you need to be on your toes to get a result."

"I can't wait to be honest. We had a great test at Winton, and I feel really comfortable in the car. Because I'm not a full time driver in this particular car, it's really important for me to get a good feel for the car, a good feel for the brakes, the handling and any changes that have been made in the past year. For me, I'm really confident heading in, and I can't wait to get on track and get amongst it."

The Norton Hornets feel they are ready to challenge the V8 hot shots at the Sandown 500 this weekend.

After a productive test at Winton Motor Raceway last week, the pair of Norton Nissans is aiming to fight for top finishing places at the Sandown race – the traditional lead-up event to the famous Bathurst 1000 at Mount Panorama.

The V8 Supercars endurance season brings with it a new set of challenges – two drivers in each car, plus long distance races that will see the best-prepared teams take the most reward.

For regular Norton drivers James Moffat and Michael Caruso and their co-drivers, it is a case of familiar territory and new ground.

Moffat will be partnered by Taz Douglas, the same teammate he drove with in 2013. Last year, their Sandown 500 was dogged with mechanical issues, and both Moffat and Douglas are keen to put a decent result on the board at the outer-Melbourne track.

For Caruso, he will be paired with Dean Fiore. The West Australian has been a lead driver in his own right for the past five years, but after stepping out of a full-time seat at the start of this season, he was snatched up by Nissan Motorsport to partner Caruso. While the pair has never raced together, it is one of the most experienced V8 combinations in the Sandown 500 field.

Track action kicks off on Friday with three practice sessions. Saturday's format is jam-packed, with practice, qualifying plus two qualifying races. Sunday will see a morning warm-up followed by the 500km race at 1:40 p.m. local time.

"I'm looking forward to the event. For me, the Sandown 500 is the second biggest race of the year. It's an event that has a huge amount of history in our sport and it's one of those races that everyone wants to win. I enjoy the track. It's unique with the grandstand down the front straight and the atmosphere it creates. I'm just looking forward to getting stuck into it because I love the endurance races – it's the best time of our season. It's also very important for us to get the Enduro Cup off to the best possible start. My co-driver Taz has slotted back into the team without a problem. He drove with us last year so it's great to have some continuity. We just need to go there, put our heads down and do the best we can."

"Like most of the events that the team has gone into this year, it's going to be a bit of an unknown for us. Compared to last year, the Nissan package has improved, and if we get everything right and a few things roll our way, we should be in for a solid result. James has been getting the car sorted the past couple of rounds which is positive. I'm feeling pretty confident. I went OK at the test, so I think we should be reasonably strong."

"I always look forward to racing at Sandown – it's close to home, plus it's one of the events that the fans can see virtually the whole track at any point. I'm looking forward to driving with Dean. He has settled in really well. He is easy to work with and I have a feeling he's going to do a good job for us. This is the start to the Pirtek Enduro Cup, so we want some good consistent results, and it would be nice to get off to a good start at Sandown."

"I'm really excited. I've never been a co-driver before – I've only ever been the lead driver – so it's a little different for me. But I know my job. We need to make sure Michael is 100 percent comfortable, so I'm here to do the best for his championship. After the test days we've had, I'm feeling good in the car and I'm super confidant that we can do a good job. Michael's recent form has been very encouraging. He has a really good understanding of the car, just like his engineer Steven (Todkill). Their bond seems really strong and I can see that the overall understanding and unity in car #36 is very tight."