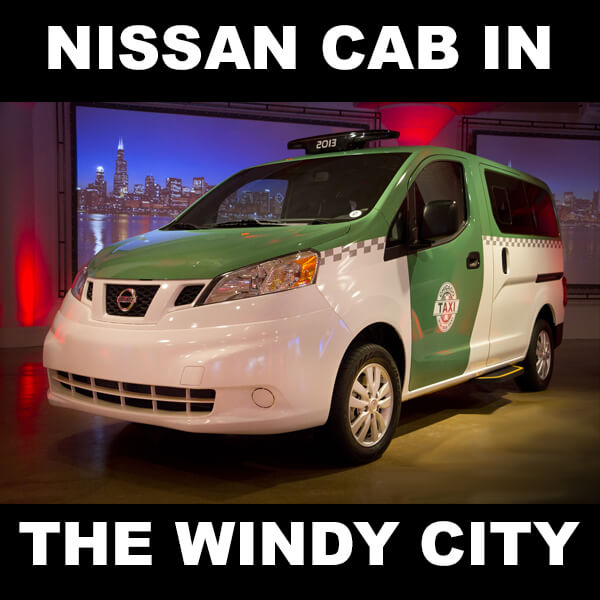 CHICAGO - Following its introduction in New York City as the city's newest taxi, Nissan unveiled at the Chicago Auto Show a customized Chicago taxi featuring more content tailored to the unique needs of metropolitan cab service than ever before.
Chicago has about 7,000 cabs in service, and Nissan wants those who know them best - taxi riders and drivers - to engage in dialogue about what features make for a better taxi experience. The public can share their thoughts through social media such as Twitter or Facebook using #HailYes.
The Nissan NV200 taxi's green and white design expresses a modern take on a historically popular Chicago taxi color. The Chicago NV200 taxi offers USB charging, anti-fatigue driver's seats, panoramic sky views of the city, reduced odors, improved leg room, more cargo space, passenger safety and other conveniences that no other taxi offers.
The Nissan NV200 is the only taxi on the market to have been crash-tested with the partition installed. Because the partition and equipment are designed to custom-fit the vehicle, passenger safety is improved by rounded edges and fully functioning airbags — features that many taxis do not have.
"With great feedback from drivers, riders and media in New York, we've had a number of dealers across the country raise their hands to get a supply of NV200 taxis for cities such as Seattle, Los Angeles, Salt Lake City and across Texas. We think Chicago is a natural fit for the premium taxi experience NV200 delivers at a competitive price," said Fred Diaz, senior vice president, Nissan Sales & Marketing, Parts & Service, U.S.A.
"Nissan's #HailYes campaign will engage Chicagoans in conversation about what's needed for a better taxi experience in the city," said Diaz. "The solution for an improved taxi isn't a pipe dream; it's already here. We'd love to see those visiting or watching coverage of the Chicago Auto Show voice their support with a
#HailYes shout-out in social media for the NV200 taxi."
Drawing on insight from taxi drivers, fleet owners and passengers, the Nissan NV200 taxi aims to provide the comfort and convenience of black-car service in an everyday taxi you can hail on the street. One of the Nissan NV200 taxi's popular design elements is the transparent roof that gives riders stunning views of Chicago city sights and skyscrapers.
Other features include:

LONDON, UK - Nissan has today unveiled the new face of its Taxi for London, re-designed to make it instantly recognizable as one of the capital's iconic black cabs.
Based on the company's successful multi-purpose NV200 platform, the vehicle was first unveiled as a bold and exciting new vision for the famous London Hackney Carriage in August 2012. In response to feedback from the London Mayor's office, Transport for London and other key organizations which have put their backing behind the new taxi, Nissan has redesigned the vehicle to better reflect the iconic nature of the traditional black cab.
Nissan's newly redesigned taxi has been developed for London, in London, by Nissan Design Europe (NDE) in Paddington, the same design center responsible for the Qashqai and Juke. The new taxi will be launched in December 2014 with a modern, clean, 1.6-litre petrol engine equipped with an automatic gearbox. Furthermore, Nissan will launch a zero emission electric version of the NV200 taxi in 2015.
Nissan already has a rich pedigree in the London taxi market - its 2.7-liter TD27 diesel engine was fitted to the FX4 "Fairway" and TX1 black cabs during the 1980s and '90s and gained a reputation for reliability and durability. In developing the NV200 Taxi for London, Nissan has ensured that it adheres to the strict TfL regulations governing Hackney Carriages, including the required 25-foot (7.6-meter) turning circle.
The NV200 cab for London is part of Nissan's global taxi program, which also encompasses New York, Barcelona and Tokyo. The London version's design is bespoke, reflecting the rich heritage and status of London's black cabs.
Among the specific changes that have been made to the front of the NV200 taxi are:
Design Excellence Manager at NDE, Darryl Scriven, said: "Having already overcome the unique technical challenges presented by the development of a new Hackney Carriage for London ahead of our launch of the vehicle in August 2012, we turned our attention to making the vehicle look the part. The Mayor's office and taxi drivers were very keen that we maintain the character of the Hackney Carriage, making it something that people in the city can be proud of.
"The main challenges were concerned with making sure customers can easily recognize it as a taxi. Being in London, we were able to go out and talk to cabbies about what was important to them as well as look at the vehicle from a customer's viewpoint. It's unusual for us to be able to work on something as bespoke as this, specifically for one location in the world and we are very proud to have been asked to do so."
Andy Palmer, Chief Planning Officer and Executive Vice President, Nissan Motor Corporation, said: "Since we launched our Taxi for London in August 2012, we have worked closely with the Mayor's office and associated stakeholders and interested parties to ensure that Nissan's new cab not only raises the bar for both driver and passenger, but is also as instantly recognizable as its legendary forebears.
"Alongside this, our engineers at Nissan Technical Centre Europe in Cranfield, Bedfordshire, have continued work on the cab, running real-world trials on the streets of London."
Nissan intends to put the NV200 Taxi for London on sale in the Capital in December 2014. From launch the new taxi will be available with a 1.6-liter gasoline engine equipped with an automatic gearbox. Compared to current diesel London taxis, this engine will be far cleaner, with lower levels of NOx and particulates.
Nissan franchised dealer group, Glyn Hopkin, has been appointed as the exclusive retailer to sell the Nissan NV200 Taxi for London from a purpose-built, ultra-modern showroom facility based in Canary Wharf.
Nissan is also forging ahead with its pioneering work in the sustainable motoring field, developing a 100 percent electric taxi – the e-NV200 – which it aims to have on the streets of London years ahead of the Mayor's target of 2020 for the development of a zero-emissions taxi. Nissan's electric taxi will be on the streets of a UK city in 2015.
Credit: http://nissannews.com/en-US/nissan/usa/releases/nissan-unveils-the-new-face-of-its-taxi-for-london
Read More
CATEGORIES »
Just for Fun , News ,
TAGS »
nissan NV200 , nissan san diego , Nissan Taxi Cab , San Diego Nissan ,