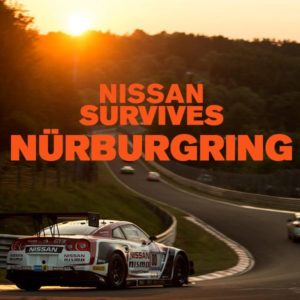 NÜRBURGRING, Germany- Two Nissan GT-R NISMO GT3 race cars have finished the 2014 Nürburgring 24 Hours. The grueling race, held on the 25-kilometer Nordschleife, saw over 160 cars and 600 drivers compete for glory in one of the toughest racing events in the world.
The star of the show for Nissan was 2013 GT Academy Germany graduate Florian Strauss.  After Lucas Ordonez was struck down with flu, the No.80 GT-R was left a man down, and despite the fact that Florian has only been racing for nine months, he had to take his full share of driving duty - eight hours of navigating the Nordschleife's 172 corners, many of which are blind.
"I wasn't too nervous, as I have been out on this track at a recent VLN race," said Strauss. "We had a bit of bad luck in the beginning, so I wanted to make sure I did everything I could to catch up again. I caught Chiyo-san (in the No.30 Nissan) at one point and we had a good battle together as we went through traffic so that was very exciting. I made sure I kept calm and got into a good rhythm to do the best I could for the team."
The bad luck Strauss mentioned was lap one contact for the No.80 GT-R, which forced Alex Buncombe to pit for repairs, instantly losing a lap on the competition. That car was then in fight back mode for the remainder of the race. Buncombe was able to lap on the pace of the leaders, but despite his best efforts and those of Nick Heidfeld and Strauss, the mountain was too high to climb.
Nick Heidfeld put in some great stints in the No.80 GT-R but came unstuck during the night when he made contact with another car.
"After Foxhole, which is a very quick part of the circuit, I came out of the compression and saw a yellow light, then straight away I saw double yellows which means you have to be travelling at 60kph," said Heidfeld. "I didn't get enough warning so I decelerated as much as I could but then came across two cars blocking the circuit. I had to choose between hitting one of them or going onto the grass. I avoided the grass as I didn't know if there were marshals there and hit one of the cars."
The resulting damage put the No.80 GT-R out of action for an hour, but once back in the race the car ran well.
"Overall I have enjoyed the race and it is good to get my first Nürburgring 24 Hours finish, despite not taking the position we hoped for," said Heidfeld. "Realistically we had the pace for a top 10 finish."
For the first eight hours of the race, the No.30 Nissan GT-R NISMO GT3 - driven by Michael Krumm, Kazuki Hoshino, Katsumasa Chiyo and Tetsuya Tanaka - ran strongly, but just after midnight a call rang out over the team radio to say there had been an accident, ironically at the same spot where Heidfeld later had his accident.
After exiting the Foxhole, Hoshino came across a stationery car and had to take emergency avoiding action but made hard contact with the barrier.  Hoshino managed to get the GT-R back to the garage, but after a thorough inspection it became apparent that the chassis frame was too damaged to repair.  The team officially withdrew the No.30 car from the race at 02:30hrs.
The highest finishing Nissan was the No.24 GT-R of Schulze Motorsport, raced by Kazanori Yamauchi, Jordan Tresson and Tobias and Michael Schulze. They crossed the line in 12th position in class.
"Before we came here, we knew what a big challenge this event was," said Darren Cox, Global Head of Brand, Marketing & Sales, NISMO. "We went head-to-head with established teams who have been coming here for years, and I'm proud of the job we did here. The Nordschleife is an incredible challenge so I was especially pleased to see how well Florian conducted himself here. Off track we had a great Nürburgring 24 Hours, exciting the loyal fans of this event with live streaming on NISMO.TV and welcoming a huge number of guests at NISMO Race Camp. We may not have got the results we wanted on track – through punctures, accidents and some bad luck – but we gave it our all and will be back again next year."
CREDIT: http://nissannews.com/en-US/nissan/usa/releases/nissan-survives-the-longest-night-at-the-nurburgring?page=3&query
Read More
CATEGORIES »
Events , Just for Fun , News ,
TAGS »
2014 Nürburgring 24 Hours , GT Academy , Nissan GT-R NISMO GT3 , Nissan GT-R Racing , nissan racing , san diego nissan gtr ,