THE KING OF DRIFT

THE KING OF DRIFT 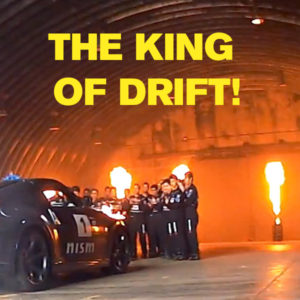 DUBAI (Aug. 14, 2014) - GT Academy Middle East judge Abdo Feghali - aka Dado, aka King of Drift - shows the new international recruits how to boss an epic drift in a 370Z.

DUBAI – GT Academy Middle East judge Abdo Feghali – aka Dado, aka King of Drift – shows the new international recruits how to boss an epic drift in a 370Z. 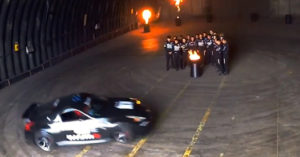 Salman Al Khater won the first GT Academy Middle East competition in 2012. He has won an international endurance race and, along with Ashley Oldfield and Tomas Scheckter, took a class win at the Britcar 1000kms at Silverstone.

"GT Academy is getting huge international interest," said Nissan's Director of Global Morosports, Darren Cox. "We know that there are gamers outside of the traditional GT Academy territories that want a shot at winning. Nissan is an international company with global ambitions, and it's exciting that GT Academy reflects that."

The Nissan ZEOD RC will become the first car to complete an entire 13.6-kilometer (8.5 mile) lap of Le Mans on nothing but electrical power when it competes in this year's Le Mans 24 hours.

The car will combine electric motors with an incredible 1.5-liter, 3-cylinder turbo engine that produces 400 horsepower yet weights only 40kg (88 pounds).
The car will occupy the Automobile Club de l'Ouest's "Garage 56" at this year's Le Mans - a spot reserved for new and innovative technologies not previously seen in the French endurance classic.

For each tank of fuel used at Le Mans, the ZEOD RC will complete an additional lap on pure electric power. While operating under gasoline power, the car's battery will be recharged by regenerative braking - recycling the heat generated by the carbon brakes to produce electricity.

The development project is being used by Nissan as part of its planned assault on the LM P1 class of the Le Mans 24 Hours and the FIA World Endurance Championship in 2015.

Ordóñez won the inaugural Nissan PlayStation GT Academy competition in 2008 and made his Le Mans 24 Hours debut in 2011. In three attempts at the famous French endure, he has twice finished on the LM P2 podium. He also took championship wins in the Intercontinental Le Mans Cup in LM P2 in 2011 and last year's Blancpain Endurance Series.

Most recently he took a class victory along with four new GT Academy graduates at the Dubai 24 Hours. Ordóñez was previously confirmed as the test driver for the ZEOD RC project but has now been promoted into a race seat

"Since becoming our first GT Academy winner, Lucas has demonstrated his speed and talent in a wide variety of Nissan machinery - LM P2, GT3, GT4, Super GT and even V8 Supercar. That versatility was a key part of the decision to place him as the inaugural race driver locked in for the Nissan ZEOD RC," said Nissan Global Motorsport Director Darren Cox. "The ZEOD RC is such a unique and different car. Anybody who drives the car is going to have to adapt to an entirely different experience. Our three drivers for Le Mans will have to be versatile and eager to learn. It will be very different but they will have the opportunity to be a part of something very special in what will not only be an extremely important project for Nissan, but for the automotive industry as a whole." 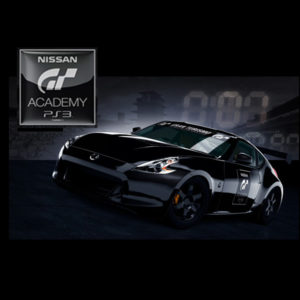 LONDON – At the Grosvenor House Hotel on London's Park Lane, Nissan was honored with the Autosport Award for Pioneering and Innovation for GT Academy Nissan's Director of Global Motorsport, Darren Cox, accepted the coveted award from F1's Paul Di Resta during a ceremony that was attended by the great and the good of the motorsport industry. With legends including Niki Lauda, Sebastian Vettel, John Surtees, Sir Stirling Moss, Ari Vatanen and John McGuinness in the audience, it was a special night for Nissan, for Sony and for GT Academy.
Nissan started the weekend celebrating an amazing season for GT Academy, which has seen the graduates notch up an incredible 41 podium finishes. At SRO's Night of Champions, they came away with a staggering five awards. Lucas Ordonez and Peter Pyzera collected their trophies for first and third places respectively in the Blancpain Endurance Series, while Nissan GT Academy Team RJN boss Bob Neville had his hands full with trophies for the Blancpain team's title, the Silver International GT Award and a trophy for second place in the team's championship in the FIA GT Series.
This weekend saw not only a huge exclamation mark on an amazing season for Nissan GT Academy, but recognition of the way it has changed motorsport over the last five years with the Autosport Award for Pioneering and Innovation.
Darren Cox accepted the award on behalf of the team behind GT Academy and explained the thinking behind the program that host Steve Ryder described as "a new way of tapping into a whole reservoir of talent."
"There have been so many stories about drivers paying to be in F1," said Cox. "Everyone in this room knows a driver who should have got there but didn't make it, but we're finding drivers who didn't even know where they wanted to be. We're taking drivers from the virtual world to the real world and making them successful. The first year people thought we were lucky, and then we must have kept getting lucky!"
"Innovation is often painful," he continued. "There have been many bumps in the road, but it has been worth the effort as we are rewarded every step of the way by the sense of pride we feel when one of our graduates stands up there on the podium, alongside guys who have been racing all of their lives. It's a real team effort – a close-knit team that I am immensely proud of."
Next year will see the NISMO Athletes competing across the globe, against the toughest competition, in some of the world's hardest races.
"GT Academy continues to prove again that Nissan is innovating on track, online and on the road," commented Andy Palmer, Executive Vice-President of Nissan. "2013 has been an amazing year for the program, but 2014 will see even more excitement as we expand even further globally and our drivers progress further up the real motorsport ladder."
CREDIT: http://nissannews.com/en-US/nissan/usa/releases/nissan-gt-academy-wins-autosport-award
PHOTO CREDIT: http://petrolsmell.com/2010/10/08/gt-academy-2010-teaser/
Read More
CATEGORIES »
Fleet , Just for Fun ,
TAGS »
nissan awards , Nissan GT Academy , nissan san diego , San Diego Nissan ,