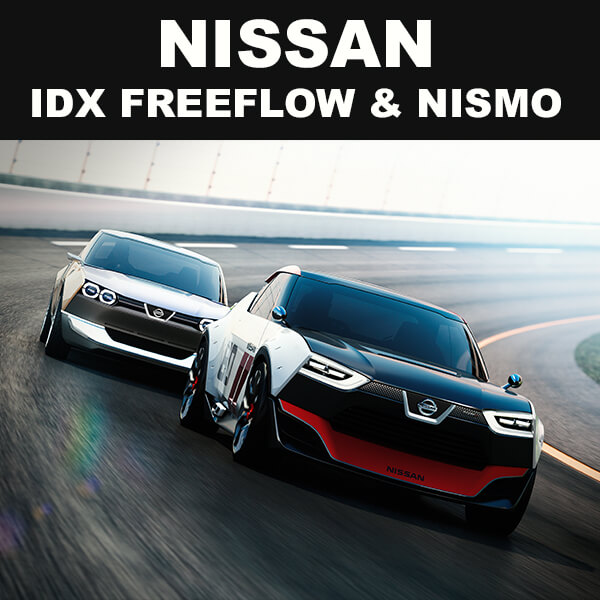 Cars displayed throughout Southern California; Keep up with hashtag #IDxinSoCal

LOS ANGELES - The acclaimed Nissan IDx Freeflow and IDx NISMO concepts will be on display in Southern California in a whirlwind, three-day tour starting on Friday, Jan. 31 through Sunday, Feb. 2, 2014.  The revolutionary concept vehicles, stars of the recent auto shows in Tokyo and Detroit, will be showcased in a variety of classic California locales, from the streets of Venice to Irvine's Cars & Coffee, and a special event at the Petersen Automotive Museum in Los Angeles.

Fans will be able to track the vehicles' whereabouts and exact locations using the hashtag #IDxinSoCal.

Following a series of media and industry sneak previews, the IDx Freeflow and NISMO will be on display on Fri., Jan. 31 from 4 to 10 p.m. on Abbot Kinney Boulevard in Venice, once described as the "coolest block in America" by GQ magazine.  There, fans of the IDx concepts will be able to get up close and personal with the cars, including speaking with designers and providing Nissan with feedback about whether to bring the vehicles to market.

The tour continues early in the morning on Sat., Feb. 1 at the legendary "Cars & Coffee" enthusiast gathering in Irvine.  Surrounded by some of the world's finest exotic machinery, the IDx Freeflow and NISMO should stand out with their own distinct style and presence.

At approximately 10 a.m. the cars will make an appearance at the Petersen Automotive Museum in Los Angeles as part of the "Inside the MotoMan Studio" event, starring automotive journalist George Notaras and featuring Peter Brock.

Superbowl Sunday, Feb. 2, will be the last event scheduled for the IDx concepts, at the "Supercar Sunday" enthusiast gathering in Woodland Hills, from 7 to 10 a.m.

Additional stopovers and events are possible between January 30 and February 2, all to be announced via Nissan's Facebook page and on Twitter with the hashtag#IDxinSoCal.

About the IDx Freeflow and IDx NISMO concept vehicles

The way people are buying cars is changing. A choice of colors and matching wheels is no longer enough. In a society where cars are purchased as a reflection - and enabler - of a driver's lifestyle, the way future models are designed needs to be revolutionized. This was the thinking behind the visionary "co-creation" of the Nissan IDx Freeflow and IDx NISMO concept cars.

The co-creation product development approach, designed to appeal to "digital natives" - the generation born after 1990 - integrates their feedback early in the creation process. Nissan thinks this approach could have real applications in the near future.

The IDx Freeflow reflects the sensibilities of the co-creators - the outlook of people who seek natural and tasteful things in every aspect of their daily lives. They seek to employ a simple and clean attitude, using the authentic items that they favor to artfully combine various things and give substance to their self-expression.

The interior details of the four-passenger IDx Freeflow are a carefully selected mix of fashionable functionality and comfort in a design brimming with creative originality. It is meant to feel like a living room inside, where the owner and his or her friends can relax.

Though compact in size - about 13.5 feet in length, 5.6 feet in width, and 4.3 feet in overall height - the IDx Freeflow impresses with its daring yet dignified exterior.

The IDx Freeflow's exterior color is a sophisticated combination of white and flax (a pale yellow shade), invoking a casual feeling like that produced by the pairing of the venerable white T-shirt with khaki chinos, and highlighted with silver accessories or a belt. The overall visual effect is completed by the addition of stylish 18-inch chrome wheels wrapped in 195/50-18 tires.

Many digital natives grew up playing racing simulation games that feature cars of the past and from all corners of the globe. They have a natural desire to realize that virtual driving experience in real cars of their own, and that is the basis of the IDx NISMO concept.

Not limited to being inspired just by racing cars, IDx NISMO was born from a refined combination of the freedom to borrow liberally from memorable vehicles of yesteryear and the present, in addition to whatever was felt exudes "cool."

Though IDx NISMO shares the overall length and height of its Freeflow cousin, the 5.9-foot width (versus 5.6-foot for the IDx Freeflow) of the car is testament to its low, wide stance that emphasizes its sporty proportions.

One of the hallmarks of box-type racecars is speediness conveyed by a reverse-slanted nose. On IDx NISMO, this frontal design element is embellished by an aura of seriousness communicated by the use of carbon panels. Side mufflers provide a pleasing exhaust note. The car also has contemporary touches such as front/rear and right/left aerodynamic spoilers and a lightweight 19-inch wheel and 225/40 tire package.

Scanning the IDx NISMO interior reveals racing-inspired crimson Alcantara® seat covers that entice the eyes, complemented by Spartan-looking meters and gauges that animate the racecar ambience. The lustrous metal surfaces contrast with the bright red suede trim that is augmented by blue stitching.

Looking to get your own hot Nissan in San Diego? Check out our amazing inventory now: