CANTON, Miss. – Every year for more than a decade, the Nissan Canton Vehicle Assembly Plant has joined forces with Habitat for Humanity Mississippi Capital Area (HFHMCA) to build affordable, sustainable homes in the local community. This year, Nissan employees are focusing their efforts on building a home for a local family in the Richard Circle neighborhood of Canton.
Read More
CATEGORIES »
News ,
TAGS »
community , give back , giving back , Habitat for Humanity , help out , helping hand , helping out , nissan , nissan cares , Nissan USA , 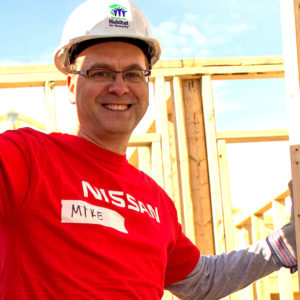 Nashville, Tenn. – Moving into a new home is a life-changing experience, according to Nashville homeowner Keisha Crump, who moved into her Nissan-sponsored Habitat for Humanity home in April 2014.

"Maybe once in a lifetime miracles happen, or maybe never," said Crump. "I can truly say that a miracle has happened for me and my family. For that I say thank you from the bottom of my heart."

Dozens of homeowners across the United States and Canada will share an experience similar to Crump's in the coming year, thanks to a $1 million donation from Nissan to Habitat for Humanity International. Today Nissan announced the continuation of a longstanding partnership with Habitat to build affordable, sustainable homes in partnership with families in need of decent housing.

Including its current donation, Nissan's total support for Habitat for Humanity amounts to $11.6 million over the past nine years. Nissan's partnership with Habitat began in response to hurricanes Katrina and Rita in 2005. Nissan donated 50 Nissan Titan trucks to assist Habitat's response efforts in the Gulf Coast and mobilized employees to assist in-home building. Since 2006, Nissan employees have helped to build 60 homes across the United States. Nissan's employees have logged more than 70,000 volunteer hours building homes with Habitat for Humanity.

"With Habitat, Nissan has a broader platform through which we can support the communities where our customers, dealers and employees live, carrying out our corporate vision to enrich people's lives," said Nissan senior vice president Scott Becker. "And as Habitat volunteers, our employees can engage directly in addressing local needs for affordable housing by making personal commitments of their time and effort on Habitat home builds."

In addition to working coast to coast with Habitat affiliates in Canada, Nissan employees will volunteer to support construction or revitalization projects in the following U.S. cities:

The company will donate four Nissan NV commercial vehicles or Nissan Frontier trucks to Habitat affiliates that make commitments to sustainable construction practices. A portion of Nissan's donation will also be used to support Habitat for Humanity disaster recovery efforts and its Global Impact Fund.

Next month, five Nissan employees from the U.S. and Canada were selected to join more than 4,000 Carter Work Project volunteers who will help build or repair more than 100 homes in Dallas and Fort Worth, Texas, during the seven-day project. The 31st Jimmy & Rosalynn Carter Work Project will be conducted Oct. 5-11.

"We are grateful to Nissan for the continuous support through the years," said Jonathan Reckford, Habitat for Humanity International CEO. "Together, we have made a difference in the lives of so many families in need of affordable housing. We look forward to continuing our work together to help families build a better future."

Nissan: Habitat Project Builds a Home, and Repairs a Heart

Nissan: Habitat Project Builds a Home, and Repairs a Heart

Nissan picked 6 of their employees to work with Habitat for Humanity as volunteers for Habitat for Humanity's 2013 Jimmy and Rosalynn Carter Work Project.  Their task was to help build, or repair, dozens of homes in three U.S. cities in a one-week period.

Juanita Clemmons, a production technician was one of those picked. She has always enjoyed helping others, but lately volunteering has become even more central to her life.  She said the opportunity that Nissan gave her to build a home in Oakland is helping her maybe even more than the homeowners.

"Just being with people has helped me get to where I am today, and just being here with these people all week has helped me to get through," said Clemmons.

Clemmons lost her son about a year ago in a car accident.

Clemmons said building a home and a new future for a deserving family is exactly what she needed to rebuild her own life.

Clemmons plans to take all that she learned in California back home to Smyrna, Tenn.  She wants to keep breaking barriers and serving others in honor of her son.

"It is not all about him or me.  It is about God giving me the strength to move on and help someone else," said Clemmons.  "It has taught me there are always people less fortunate than you are."

Nissan employees like Clemmons have volunteered more than 25,000 hours to build, side by side, with Habitat partner families. Since 2005, Nissan has contributed nearly $11 million in house sponsorships and truck donations in the U.S. and internationally.