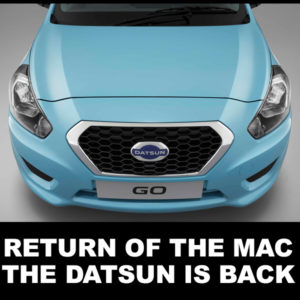 YOKOHAMA, Japan - On March 19, the first Datsun cars sold in the 21st century will be delivered to customers in India. It fulfills a promise made two years ago to bring back the marque that made car ownership mainstream in Japan and numerous other countries, and now returns as the brand of choice for the risers in today's high-growth markets.

The first 21st century Datsun customers will be in India. They will be taking to the roads in their new Datsun GO exactly one hundred years from the launch of the first ever DAT car, in Japan. Over that century, Datsun went on to sell more than 20 million vehicles in 190 countries.

The keys to the new Datsun's will be handed over at celebration events planned for March 19 and March 20 in the Indian cities of Delhi, Chennai and Kolkata.

The Datsun GO will be offered through a network of more than 120 Datsun dealer outlets across the country. Detailed pricing will be announced on March 19th. As disclosed earlier, Nissan Motor Private India Limited will distribute Datsun vehicles in India.

Datsun is expanding rapidly around the world. New Datsun models will be introduced in Indonesia, Russia and South Africa later this year.

Datsun originated in Japan as DAT-GO (the DAT-car) almost a century ago in 1914. The word DAT means "lightning-fast" in Japanese but is also a reference to the first letters of family names of the three financiers who supported the business at the time: Den, Aoyama and Takeuchi. Using the same logic, it was promoted as Durable, Attractive and Trustworthy, or DAT for short.

In 1933, Nissan's founding father Yoshisuke Aikawa took over the business with a vision of "mobility for all." The introduction of a lightweight, economical yet resilient car to meet the aspirations of young Japanese people in the early 1930s was named the "son of DAT" – Datson - which later changed to Datsun. Local engineering and mass-production made the founder's dream a reality.