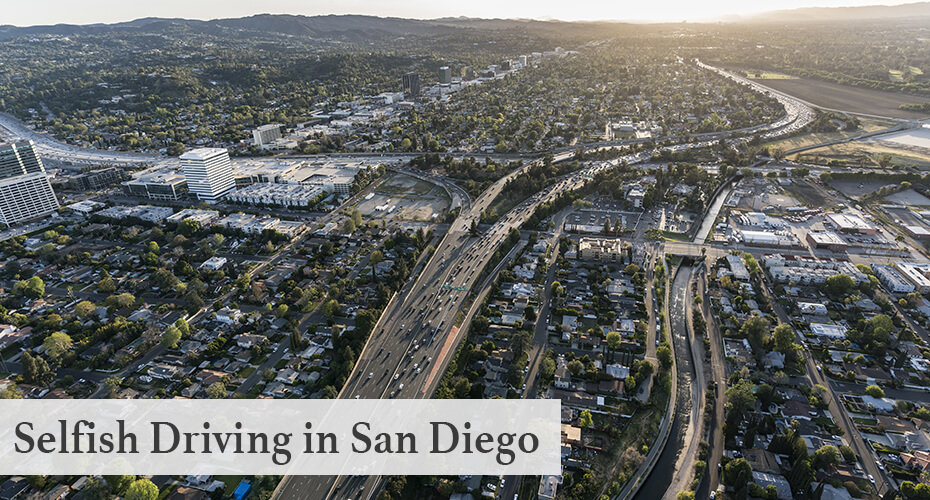 San Diegans! I’m sure you’re tired of waiting endless hours in traffic!
What would you do if you learned that you could possibly avoid it?
Well… You can so long as you AVOID “Selfish Driving”.

The amount of time that San Diego drivers are spending on the roads is undeniable. Lately, the time we are spending in traffic seems to be growing outrageously. This is not only due to the increasing number of cars on the road, it also has to do with us as individual drivers.

It may seem unbelievable, as we do not like others questioning our driving. Nonetheless, researchers have found answers to preventing traffic saturations, and all it takes is… we as DRIVERS being selfless while on the road.

The Rapid Route Epidemic
As San Diegans we know our city, meaning we know the “faster” routes, freeways and shortcuts; and if we don’t, well we Google it or we use our GPS. We all love technology and it comes in handy when deciding what the faster route is to get home after a long day at work. But does it always present the best solution?

Researchers at MIT have thoroughly followed the ongoing traffic saturations and have collected data on simulations created over the years. They have concluded that a main reason for this wide traffic congestion is due to “selfish driving.” Specifically, to find the faster route through our GPS systems, we cause traffic to become worse. We ultimately all end up choosing the fastest route offered and overlook the fact that others trying to get to the same destination are offered the exact same route.

I know we are all thinking – “well, what is the best solution if I want to be at my destination in a timely manner?”

Rerouting Is The Best Option
Yes, we all have busy lives and complex schedules; however, the simulations held by the MIT researchers have determined a rather uncomplicated solution—we must be selfless drivers!

The research suggests that doing the unusual can potentially resolve traffic congestion; for example, taking a route that may have a few minutes delay. While it may seem ridiculous to try this approach, researchers found through simulations in major cities, that rerouting proved to be significant. Redirecting drivers to alternate routes managed to decrease the flow of traffic by as much as 30%. Additionally, routes that were shown as taking 5-7 minutes longer, ended up saving others a few minutes.

What This Means for San Diegans
This is a great opportunity for San Diegans to be able to work around congested traffic by taking the initiative to be a selfless driver.

While deciding to take alternate routes will not save you a large amount of time, the overall solution is to consider remedying traffic for the city as a whole.