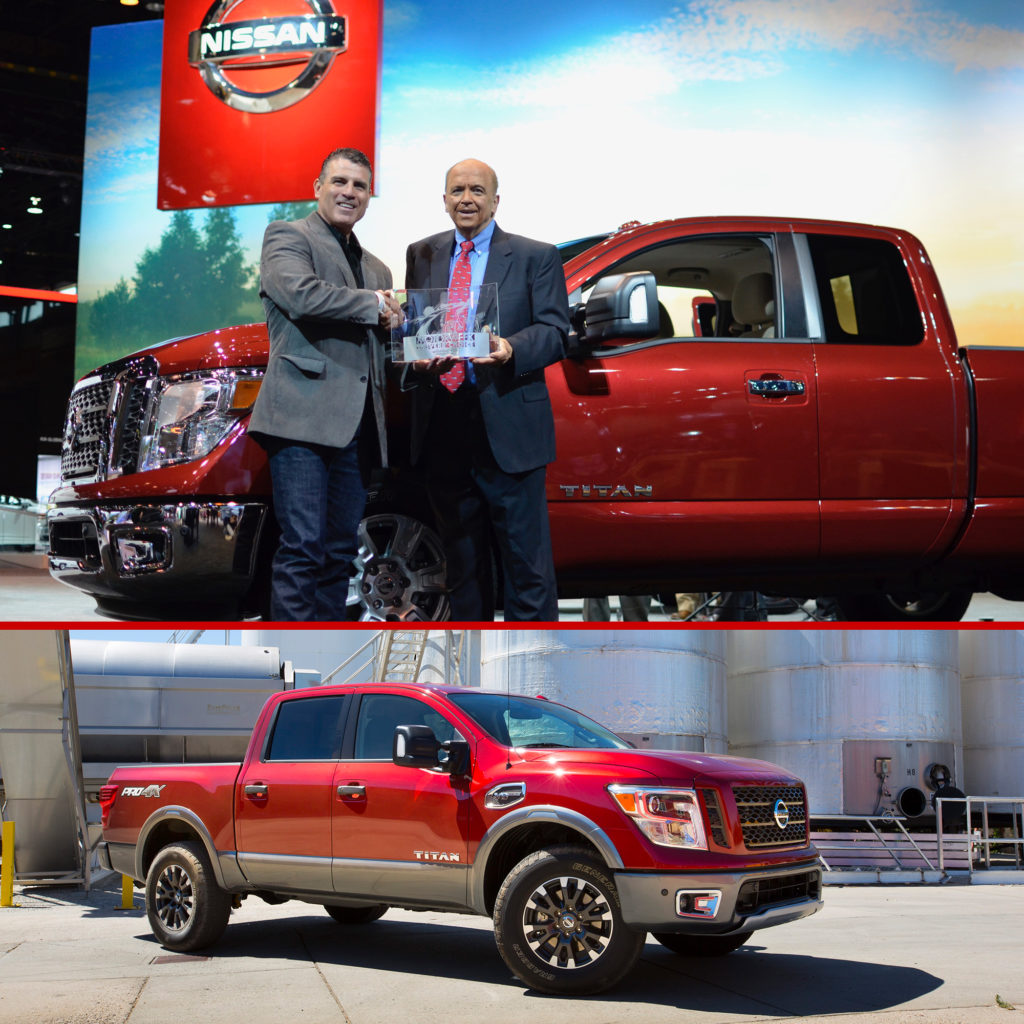 The all-new TITAN half-ton pickup was announced today as the "Best Pickup Truck" category winner of the MotorWeek 2017 Drivers' Choice Awards at the 2017 Chicago Auto Show. TITAN and the other Drivers' Choice winners will be featured in a special episode of MotorWeek, which will air on public television stations nationwide beginning February 11, 2017, and on Discovery's Velocity Network beginning February 21, 2017.

This is the second consecutive year Nissan has been honored in the Best Pickup Truck category, following the selection of TITAN XD in 2016. In choosing the new TITAN half-ton for the honor, MotorWeek Creator and Host John Davis reported, "With this impressive new generation of TITAN, it's obvious that Nissan is in the 'full-size truck' game to stay." “Winner of the Drivers' Choice Award for Best Pickup Truck for a second year in a row, Nissan has managed to not just match its domestic and import brand competition in both ruggedness and comfort, but with the XD, fill a gaping market void between tradition Light and Heavy Duty models. Our followup award for 2017, however, takes notice that as the Titan lineup fills out, that there will soon be a formidable, powerful, new option for just about every big truck buyer."

"The TITAN half-ton competes in the heart of the full-size pickup market, and awards like this buyer-focused honor from MotorWeek give our bold new TITAN – covered by the industry's best1 5-year/100,000-mile bumper-to-bumper warranty – added credibility right out of the box," said Fred Diaz, division vice president and general manager, North America Trucks and Light Commercial Vehicles, Nissan North America, Inc. "It's also appropriate to receive the award at the Chicago Auto Show, where we are debuting the latest addition to the lineup, the new 2017 TITAN King Cab."

The TITAN half-ton is powered by Nissan's new 390-horsepower 5.6-liter Endurance® V8 engine. First available in a roomy Crew Cab body, in both 4x4 and 4x2 configurations and in five well-equipped grade levels (S, SV, PRO-4X, SL and Platinum Reserve), the TITAN lineup added a new TITAN Single Cab body style to the lineup in November. The new TITAN King Cab is scheduled to begin arriving at Nissan dealerships nationwide in the spring.

The 2017 TITAN half-ton's bed is designed to work hard and play hard, with a wide range of available functionality features. Nissan's popular Utili-track® Bed Channel System, which made its industry-first debut on the original TITAN, features four heavy-duty aluminum alloy cleats that move and lock anywhere along the walls, as well as bed floor and header tracks that give the user endless tie-down possibilities.

Other available TITAN bed features include the popular spray-on bedliner, flush-mounted LED bedrail lighting, cargo and tailgate lamps, 110-volt in-bed access and a damped tailgate that is light to lift and smoothly damped when lowering. Three bed lengths are offered: 5.5-foot for Crew Cab models, 8.0-foot for Single Cab and 6.5-foot for the King Cab.

In addition to the TITAN half-ton, also available is a complete lineup of 2017 TITAN XD Crew Cab, Single Cab and upcoming King Cab models. Along with the Endurance® V8, TITAN XD is offered with a powerful 310-horsepower Cummins® 5.0L V8 Turbo Diesel mated to a heavy-duty 6-speed Aisin automatic transmission. TITAN XD has a maximum towing capacity rating of more than 12,300 pounds when properly equipped.