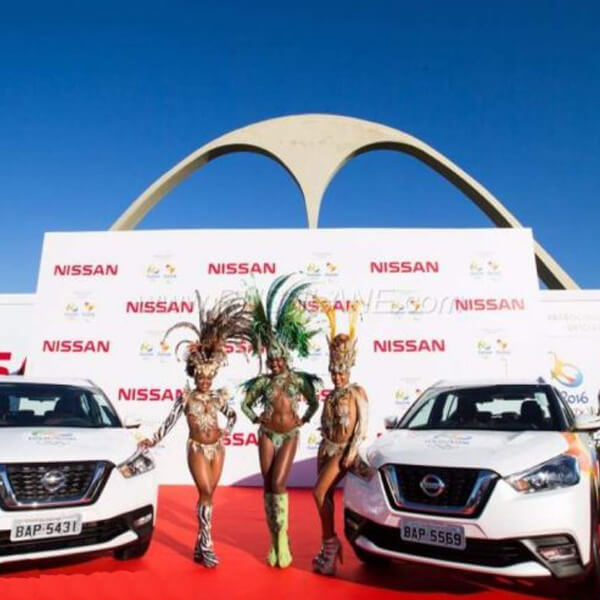 Rio de Janeiro, Brazil – The vehicle fleet that will be used during the Rio 2016 Olympic and Paralympic Games was officially delivered today by automotive partner Nissan to the Local Organizing Committee. The company will supply about 4,200 vehicles comprising various models to meet the many day-to-day mobility needs during the Games.

The official delivery ceremony was held at the Sambadrome in Rio de Janeiro, one of the city's landmarks and the venue which will host archery events during the Games. Attending the ceremony were Francois Dossa, President of Nissan Brazil, and Sidney Levy, Rio 2016 Organizing Committee's General Director. The Brazilian queen of basketball, former player Hortencia Marcari, who is Team Nissan's mentor, was invited to represent the Brazilian athletes.

The Olympic fleet features cars from various categories and sizes to ensure comfort and best use across many different activities. Among the models, there will be more than 200 of the first-of-its kind Nissan Kicks crossover. The car, developed and designed to reflect the vibrant culture, style and colors of Brazil, is the official vehicle of the Rio 2016 Olympic and Paralympic Games and is being incorporated into the Games before it even reaches Nissan's stores in Brazil on August 5, in a world premiere. Besides Kicks, the fleet includes the Nissan March, Versa, Sentra, Altima and the mid-size truck Frontier.

The models will be used for transporting thousands of athletes, delegation members, and guests, for supporting operational activities and also some competitions. The fleet will be driven by volunteers selected by the Organizing Committee.

"Over the past several years, we have worked very closely with the Rio 2016 Organizing Committee on a variety of activities, but the fleet delivery is an important moment for us because this directly involves our vehicles, most of which were produced in Brazil. We know how important it is to ensure the mobility of the athletes and Olympic family with comfort, agility and low carbon emissions, since all our passenger cars currently manufactured in the country have a grade A in energy efficiency, the best possible score", says François Dossa, President of Nissan Brazil.

Nissan Brazil is an official sponsor of the Rio 2016 Olympic and Paralympic Games. In addition to the Olympic fleet, the company will have a presence at the Olympic Live Sites and is developing activations to engage all Brazilians and visitors at the event. Additionally, Nissan is sponsoring the Olympic and Paralympic Torch Relays and the Brazilian Olympic Team, which includes a number of athletes from Team Nissan - a project created by the company in 2012 and formed by 31 Brazilian athletes and para-athletes.