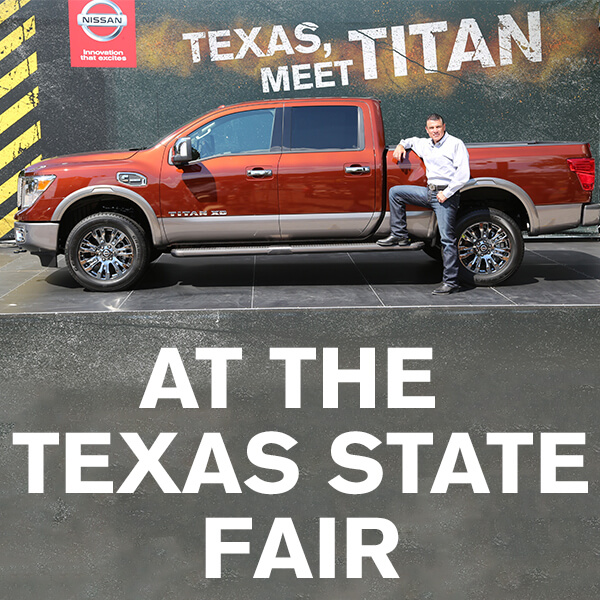 DALLAS – Nissan kicked off its biggest presence ever at the world famous State Fair of Texas with a special showing of the all-new 2016 Nissan TITAN XD full-size pickup in the heart of American truck country.

The 2016 TITAN XD, which was planned in Tennessee, designed in California, engineered in Michigan, tested in Arizona and assembled in Mississippi, will be featured on a specially-built "TITAN Proving Grounds" display, providing truck fans the unique opportunity to take part in a series of interactive activities and experience TITAN XD in its natural setting. The State Fair of Texas runs September 25 through October 18 at Fair Park in Dallas.

"Texas has played a huge role in the development of our all-new lineup of American TITAN trucks. The initial focus groups took place here and we've taken it through multiple clinics throughout the state. Texans know trucks and we wanted to hear from expert truck customers," said Fred Diaz, senior vice president, Sales & Marketing and Operations, U.S.A., Nissan North America, Inc. "To test TITAN XD under real world conditions, we've also put prototype trucks in the hands of folks in Texas and across the U.S. - construction workers, farmers, ranchers, and even a rodeo equipment manufacturer."

The centerpiece of Nissan's State Fair of Texas display is the TITAN XD, which is powered by a new Cummins® 5.0L V8 Turbo Diesel engine rated at a powerful 555 lb-ft of torque and is set to go on sale at Nissan dealers nationwide in December.

The TITAN XD – which features a maximum towing capacity of more than 12,000 pounds* when properly equipped – will later be available in a total of three cab configurations, three bed lengths, two frame sizes, 4x4 and 4x2 drive and five grade levels.

"The key attributes of TITAN XD is that it offers increased towing stability, along with more torque, than a traditional half-ton pickup – without the sacrifices of a harsh ride, unnecessary capability and higher price of a ¾-ton truck," said Diaz.

Also assisting trailer hook-ups is the TITAN's RearView Monitor with Trailer Guides, while the available Around View® Monitor (AVM) provides a virtual 360° "bird's eye" view of the surrounding area from front, rear and side cameras to help with parking and pulling in and out of tight spaces. The system also includes Moving Object Detection (MOD), which helps detect moving objects such as vehicles, shopping carts or other large objects near the vehicle when backing out via an on-screen notification and warning chime.

Helping TITAN XD owners take advantage of its ample towing power are two available hitches – including an integrated gooseneck hitch engineered into the frame and easily accessible in the bed.

Nissan currently employs more than 1,000 people in Texas at the Nissan Motor Acceptance Corporation (NMAC), Nissan Central Region and a parts distribution center. There are also 71 Nissan dealerships in the state.

GET A TASTE OF HOME WITH YOUR OWN TITAN TODAY AT ONE OF SEVEN MOSSY NISSAN LOCATIONS OR VISIT US NOW ONLINE AT MOSSYNISSAN.COM!