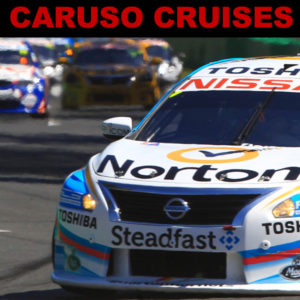 Caruso, driving the Norton/beyondblue Nissan Altima, finished third, enough to secure third overall for the Grand Prix event.
Caruso dropped back through the pack early, but with some great speed aboard his #300 beyondblue Altima, Caruso raced his way through the pack, eventually pipping Garth Tander at the finish line for third overall.
Caruso's Norton teammate James Moffat was very competitive, running as high as fourth until he was the innocent victim in a clash with Nissan teammate Rick Kelly and Red Bull driver Jamie Whincup.
The next event on the V8 Supercars Championship calendar takes us Symmons Plains Raceway in Tasmania in two weeks time.
Michael Caruso, #300 Norton/beyondblue Nissan Altima
"It's an absolutely brilliant result for Norton, beyondblue and Nissan. We started fifth and got crushed back to eighth. It was on for young and old out there and I was getting hit at every corner of the car. To manage to climb back up to third, it was a testament to the fantastic car speed that we had. It was as good as it's been this weekend. And to get Garth over the line, it makes the result even sweeter."
James Moffat, #360 Norton Nissan Altima
"Before the Safety Car, the speed of the car was fantastic. I was definitely pulling in Fabian (Coulthard) who was wounded with a flat spotted tire, but I felt it was just a matter of time before we reeled him. It was a great effort by the boys. They tuned it up over night and the changes definitely worked. That was one positive. Obviously, the result wasn't fantastic, but I was a victim of other people's accidents. That's motor racing, though. It's a shame for the guys, because they'll be fixing the car when they probably shouldn't have to be. I'm more encouraged now, because we have a bit of speed back in the old girl, and that's something to look forward to for the rest of the year."
Sunday trouble at the Australian Grand Prix
In other Altima V8 Supercar news, the Australian Formula 1 Grand Prix weekend ended on a low note for Jack Daniel's Racing drivers Todd and Rick Kelly, with both Nissan Altimas striking trouble on the streets of Albert Park.
The pair made solid progress in the early running of the fourth and final heat for the weekend, but Todd's race unraveled after the halfway mark of the 12-lap journey when his car suffered a sudden cooling issue.
Todd immediately parked the car to save damaging the engine, with the safety car called upon to remove his vehicle from the circuit.
Rick then made solid progress from the ensuing restart, but at the entry to turn nine, contact sent the car out of control into James Moffat and Jamie Whincup.
Stuck in the sand trap, Rick was classified a non-finisher.
The V8 Supercar Championship now moves south, with the Tyrepower Tasmania 400 scheduled for March 28-30 at Symmons Plains Raceway.
JACK DANIEL'S RACING QUOTEBOARD
TODD KELLY - #7 Jack Daniel's Racing Nissan Altima:
Race 4- DNF
"The weekend was looking not too bad, we had the potential to have all four cars in the top-ten for most of the weekend, and we've only come back with one car in the end. It's disappointing, but the speed from the cars has been pleasing. We'll bounce back at Symmons Plains."
RICK KELLY - #15 Jack Daniel's Racing Nissan Altima:
Race 4- DNF
"It was the exact opposite of what we hoped for. Sunday at the AGP always goes a little bit crazy with double points, and there was some really good fierce racing out there. We got a couple of good restarts and moved forward a little bit, and unfortunately we went under another car there and caught his back wheel when he moved over a bit.
"It sent me in the air, and it was a bit out of control from there to be honest. Once I climbed on the brakes I couldn't do much, it took us out, and it took (James) Moffat out as well, which is really disappointing because the last thing you want to have is for team cars to come together. No doubt we are all quite disappointed by that, the car pace was really good, in our car we made really good improvements today. That's as good as we could have hoped for from the weekend, we got (Michael) Caruso on the podium, we've now got to focus on Tasmania."
Credit: http://nissannews.com/en-US/nissan/usa/releases/michael-caruso-seals-super-podium-result-at-albert-park
CATEGORIES »
Events , Mossy Stories , News ,
TAGS »
nissan altima , Nissan Altima Racing , nissan racing , San Diego Nissan Altima ,
SHARE »
Share
Tweet